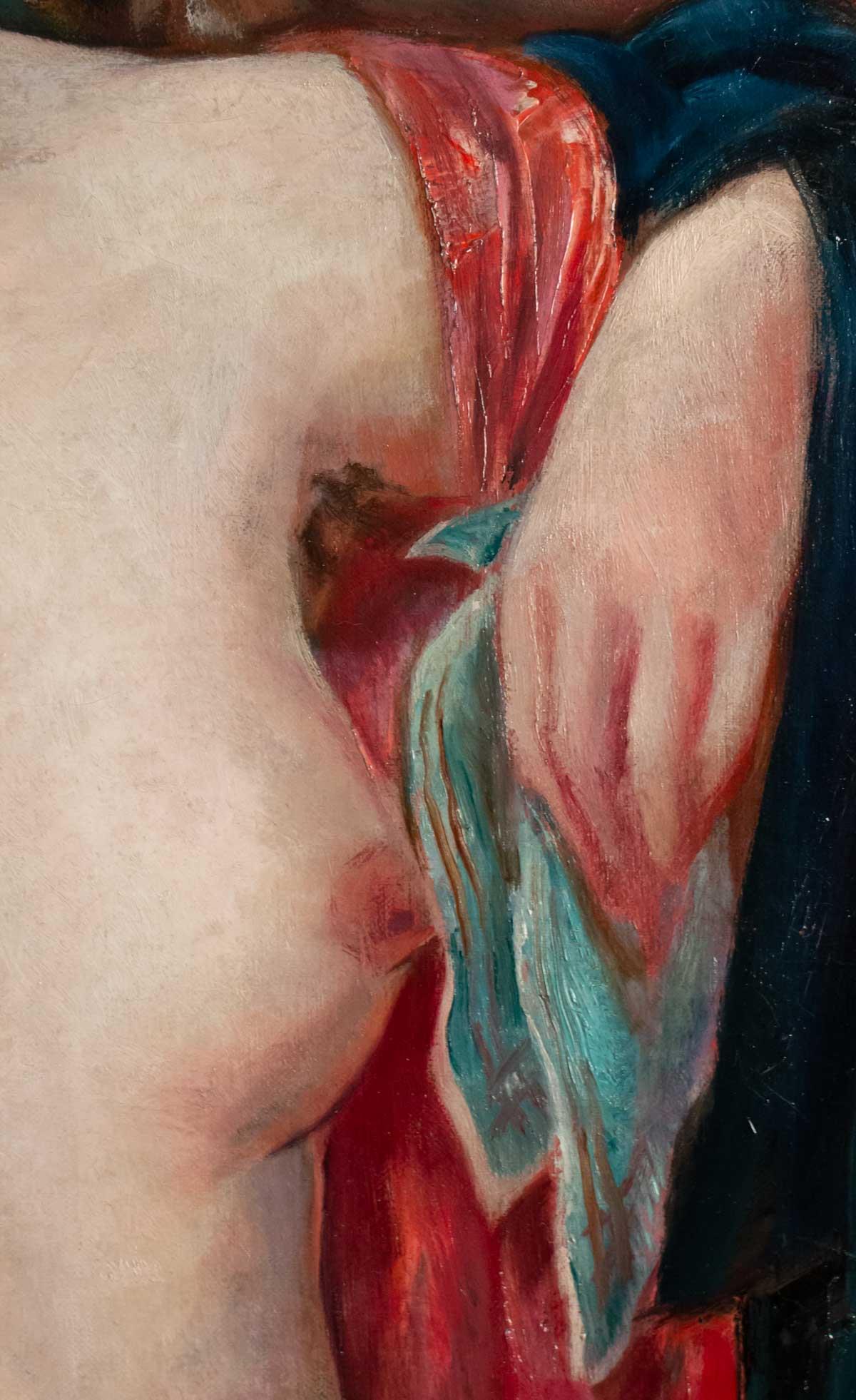 Yasushi Tanaka represents what he prefers: the female nude indoors. His palette is made up of colored harmonies, which he declines with delicacy. The skin of his model is adorned with subtle nuances, from purple to pink and passing through blue. The model presents her bust from the front and turns her face away, as is often the case in her nude paintings. The interior is adorned with colorful and luxurious fabrics.
Yasushi Tanaka born in Japan in 1886. In 1904, he moved to New York and trained at Broadway High School. Appreciated and recognized, he exhibited at the Washington Museum in 1912.
In 1915, he presented his works for the “Panama Pacific International” exhibition. Two years later, he married Louise Gebhard Cann, American historian and art critic. He frequents Hemingway, Pound and Joyce, friends of his wife.
In 1920, he moved to Paris, rue Notre-dame-des-champs. He exhibited at the Salon des Beaux-Arts, the Salon d’Automne, the Salon des Indépendants and the Tuileries.
In 1924, the Marsan gallery devoted a personal exhibition to him. The Parisian galleries Bernheim-Jeune, Devambez, Carmine and Druet also exhibit his work.
Yasushi Tanaka prefers French techniques to traditional Japanese practices. However, he remains aloof from French artistic movements.

Bibliography:
• Letters from Yasushi Tanaka to Frederic C. Torrey, 1913-1924, online . Tanaka’s letters to Torrey relate to the contemporary art world, his paintings, exhibitions, and fellow artists in Seattle and Paris, including muralist John Davidson Butler. Tanaka talks about his marriage to Louise Gebhard Cann, his fight against Western ideals in Seattle art circles, his concern for his mother and brothers in Tokyo, his emigration to Paris and his condition after the First World War , and the success of his personal exhibition at the Galerie de Marsan in 1924 (“I finally managed to be renowned as one of the most skilful contemporary painters here in Paris”. Also included are some letters from Cann to Torrey, 3 exhibition catalogs (1914-1921), and 3 press clippings (1915-1921).