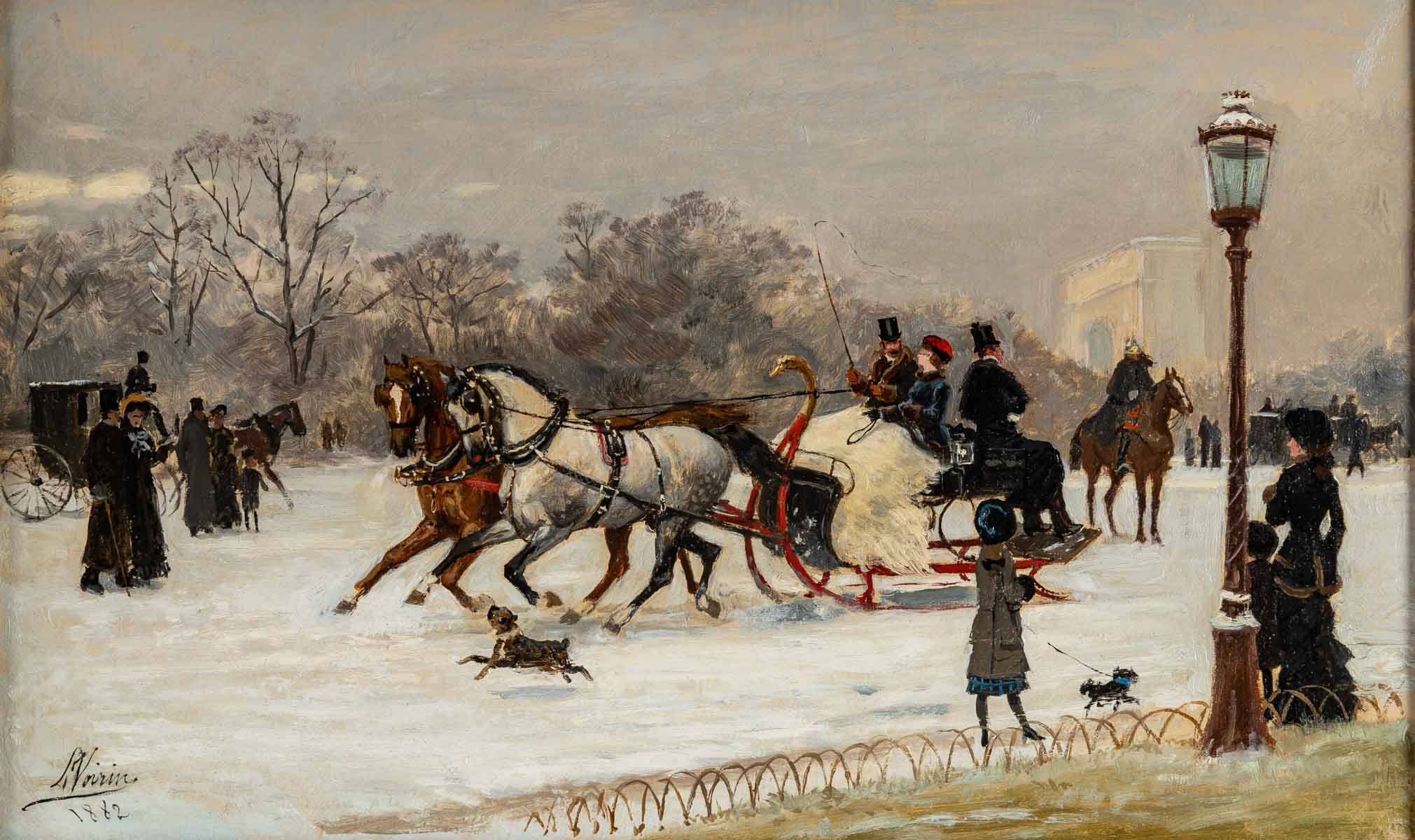 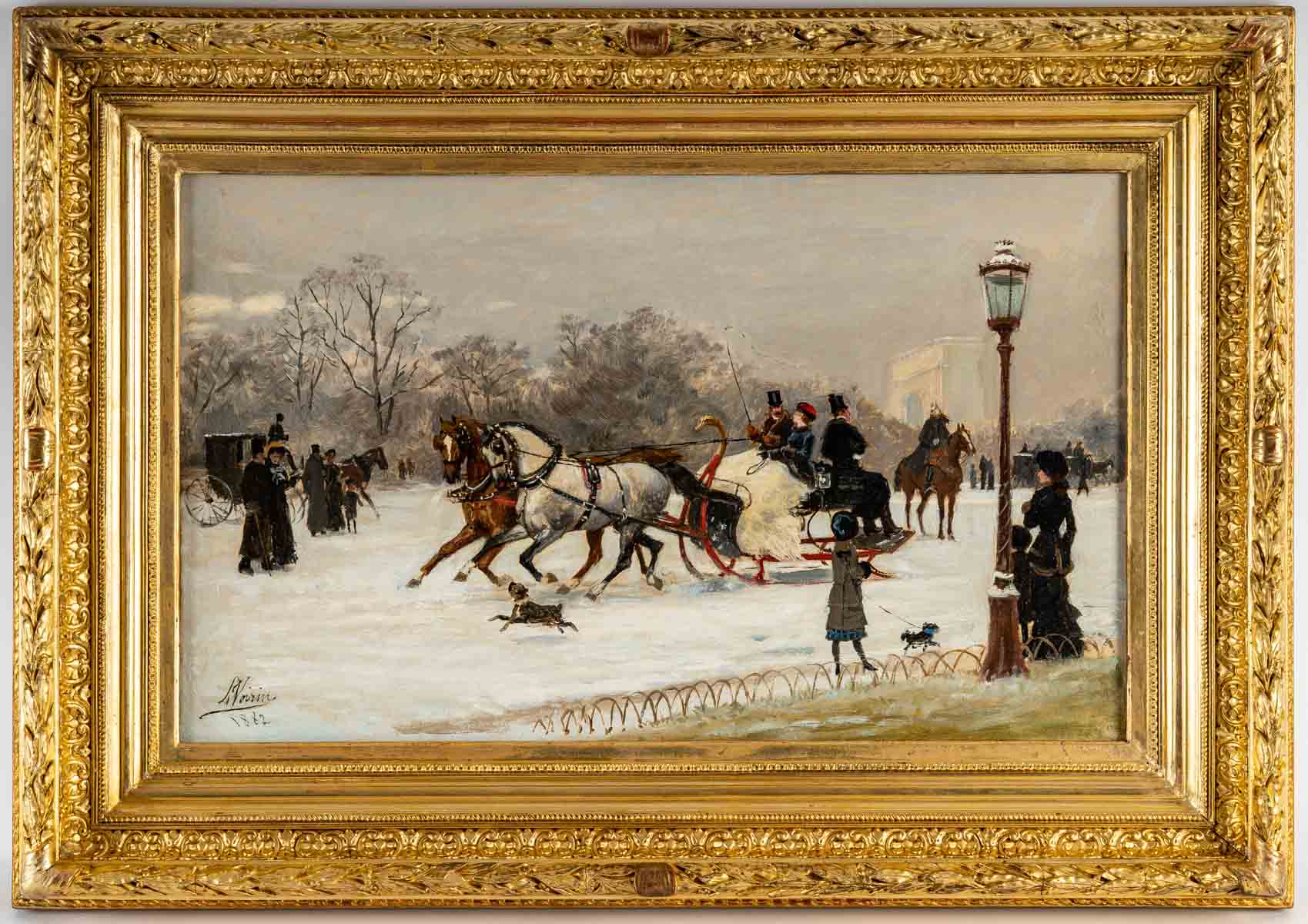 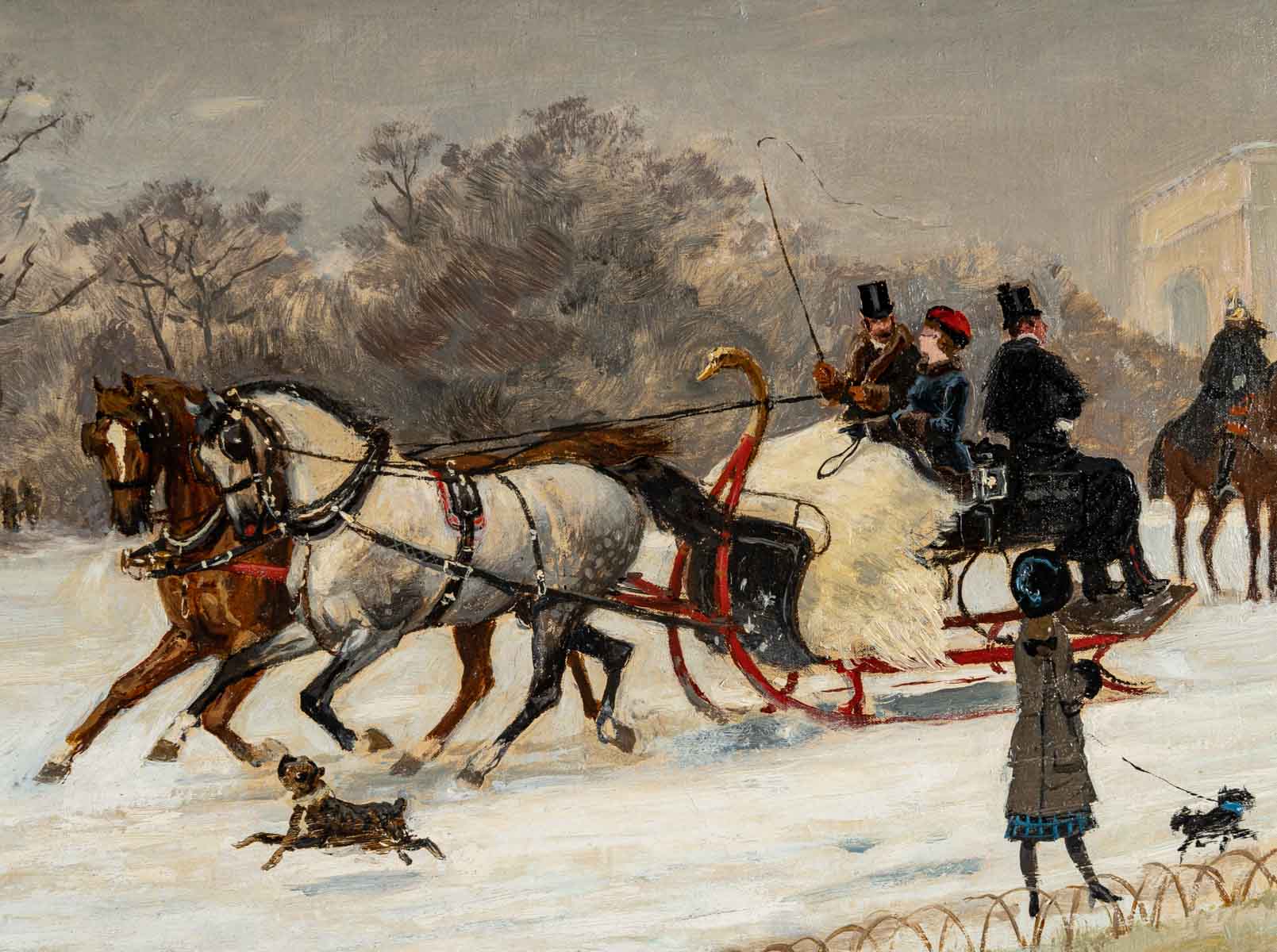 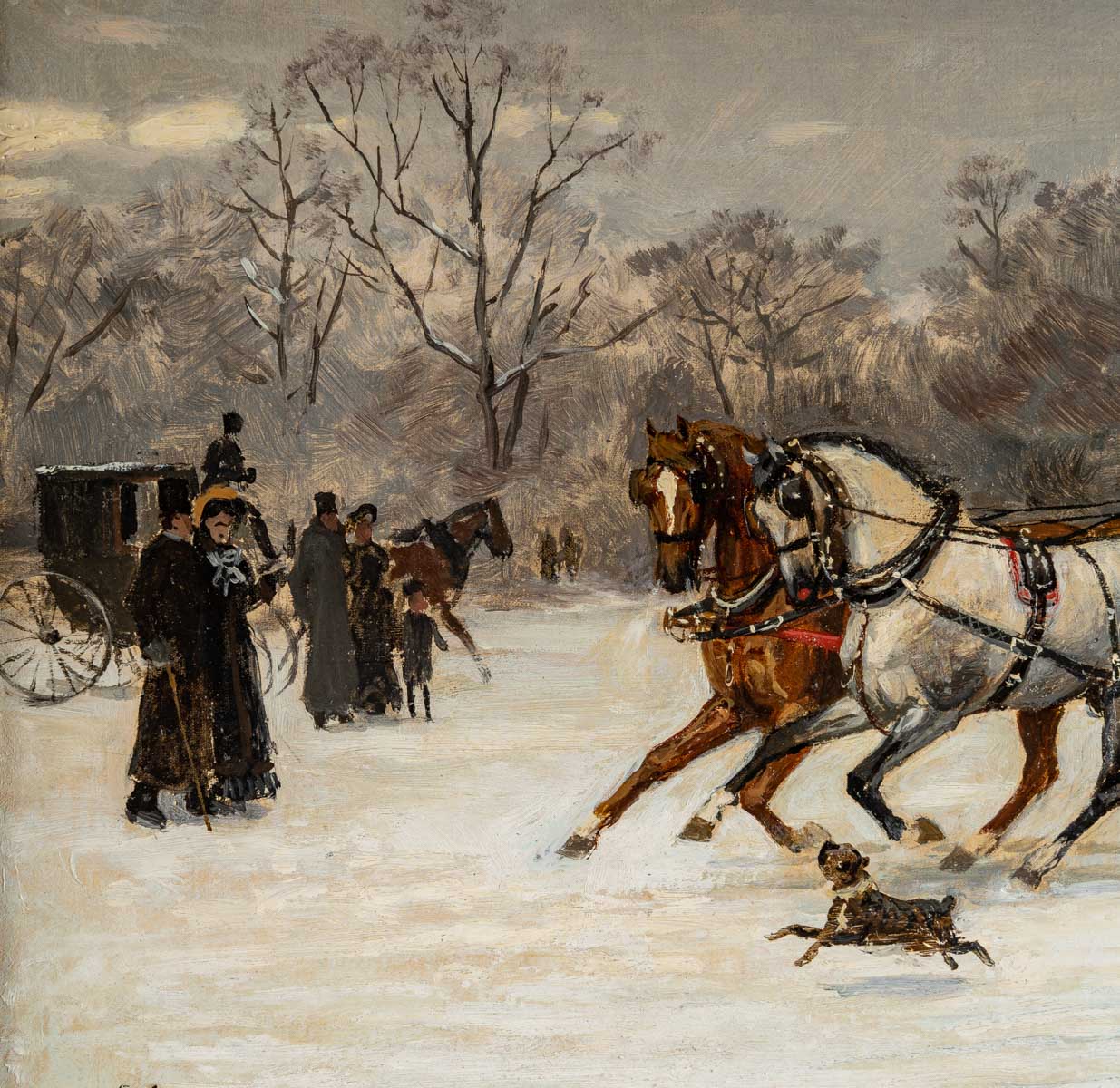 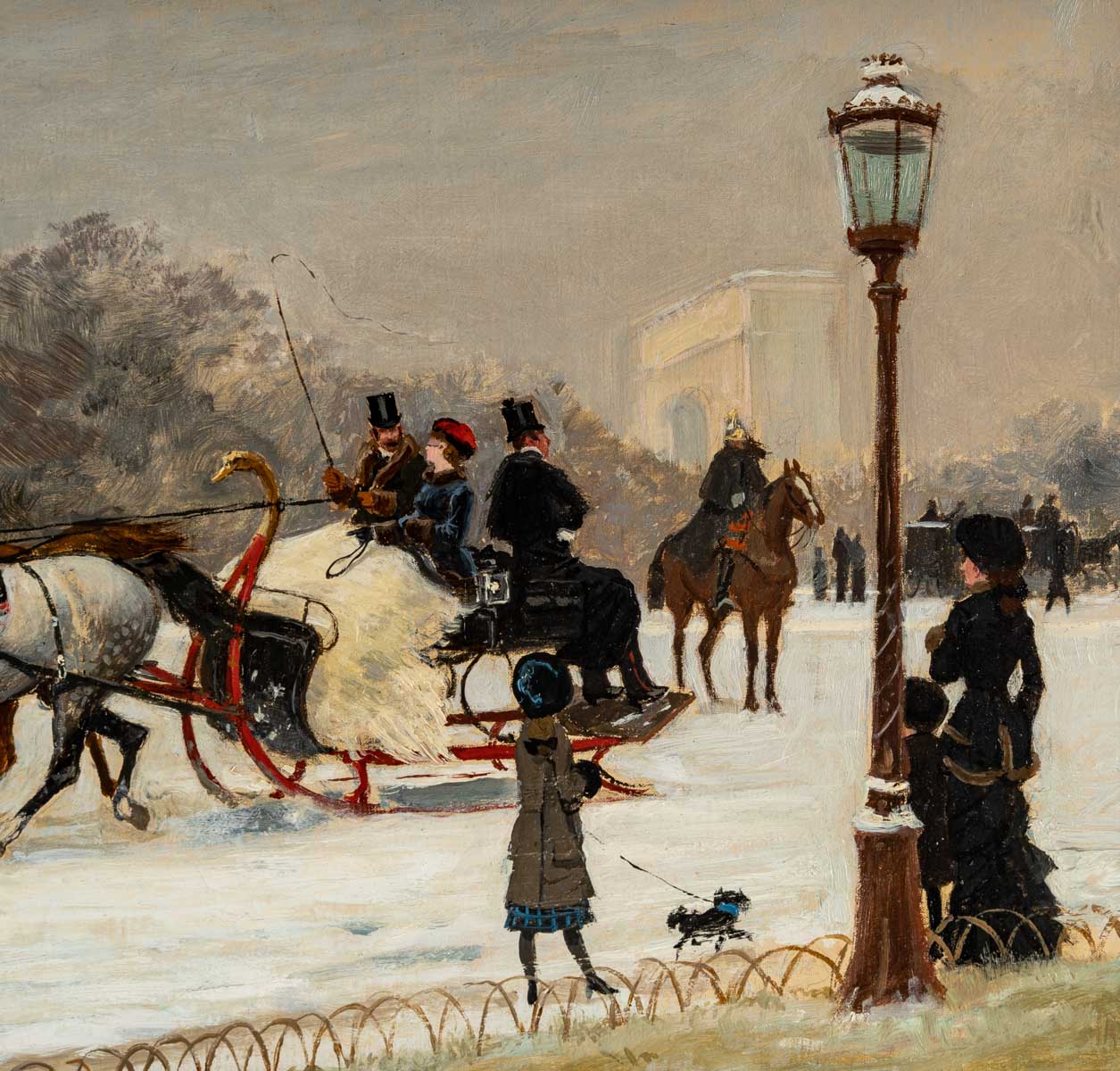 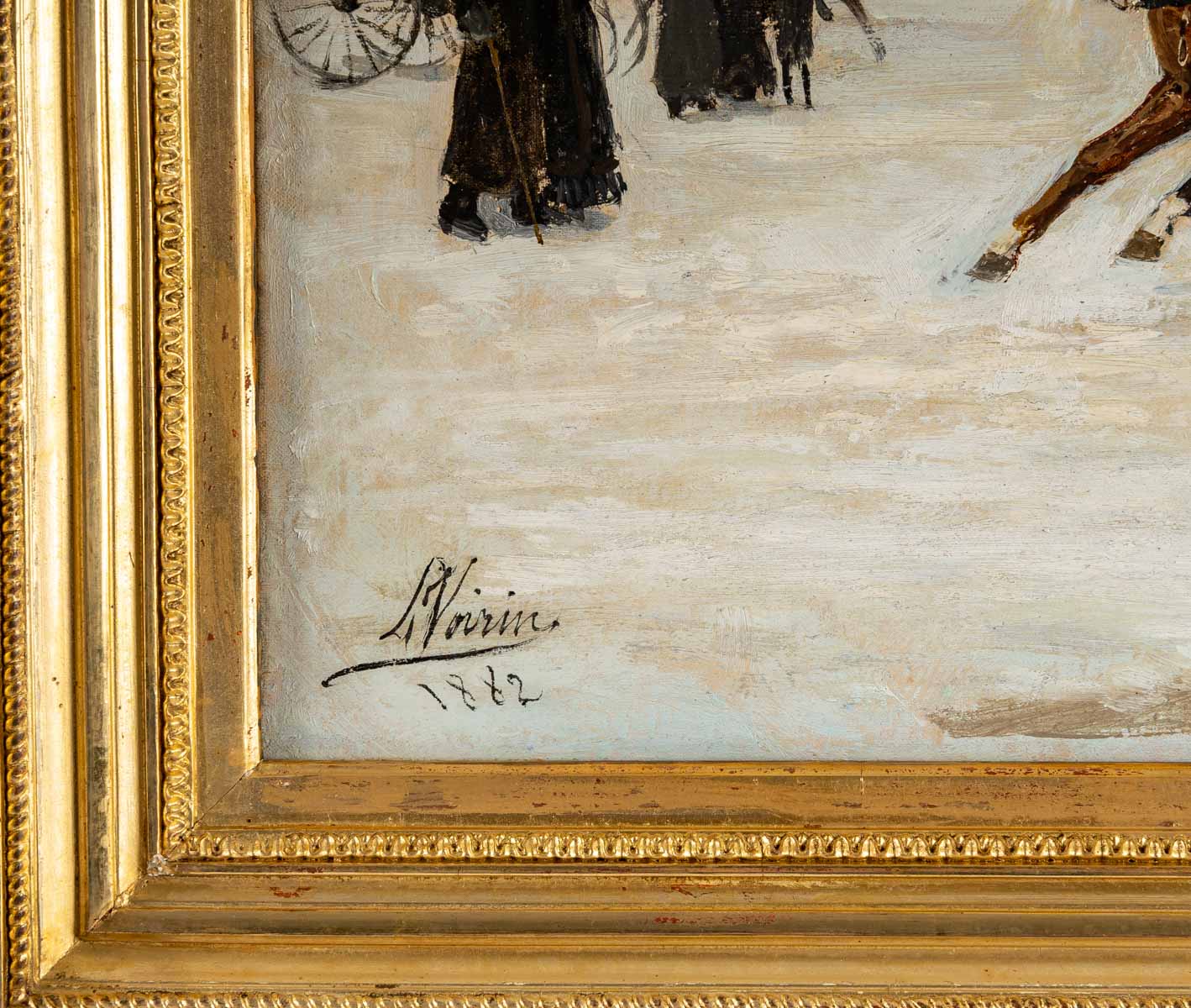 The sled, winter day in Paris around the Place de l’Etoile, 1882.

In the magical setting of the capital covered by a layer of snow, Léon Voirin represents a charming and lively scene, as taken on the spot.

A sled carrying an elegant woman is located at the center of the painting. Well wrapped up and protected by fur, the Parisian, whose red veiled hat matches the color of the sleigh, is in deep discussion with the coachman. The place is busy despite the cold, couples, families, carriages, a little girl with her dog, a horseman of the Republican Guard are walking around. In the background, we see the Arc de Triomphe covered by snow. A lifted and impressionistic brush touch to treat the landscape alternates with a more licked and fine touch for the characters, like the detail of the elegant outfits.

Our work bears witness to the painter’s love for urban scenes of daily life, treated with a sense of anecdote and precision of detail.

Léon and Jules Voirin, are two twin brothers, painters, in Nancy, under the July Monarchy, in a family of merchants. After having followed the courses of the secondary school of medicine, they decide to devote themselves definitively to painting, art which they practice since the age of 15. They thus spent two years with their master Eugène Guérard in Paris before returning definitively to the Lorraine capital.
Their official career began at the Salon de Nancy in 1866. From 1874, they participate in the Salons des Beaux-Arts in Paris where they exhibited their paintings frequently. They were talented chroniclers of daily life in Nancy in the second half of the 19th century and brought the genre scene back into fashion, a pictorial genre that had disappeared in the provinces since the end of the 18th century.
They devote their entire career to sketching and representing civilian or military scenes of daily life: street scenes, fairs, races, military halts, rehearsals or parades…
Friends of Charles de Meixmoron and the Wiener family, they admired and collected the works of the Impressionists, whom they frequented.
In 1886, they collaborated with the Majorelle house on the decoration of several “paravents” ordered by famous celebrities, in particular for the King of Holland.
They spent their whole lives in the family home on rue des Michottes devoting themselves to their work, surrounded by their collections.
They are buried in the Préville cemetery and a street in Nancyis named after them. .

Many works are in private collections as well as in the Museum of Fine Arts in Nancy.

– Amazon on a walk

– The cab being loaded,