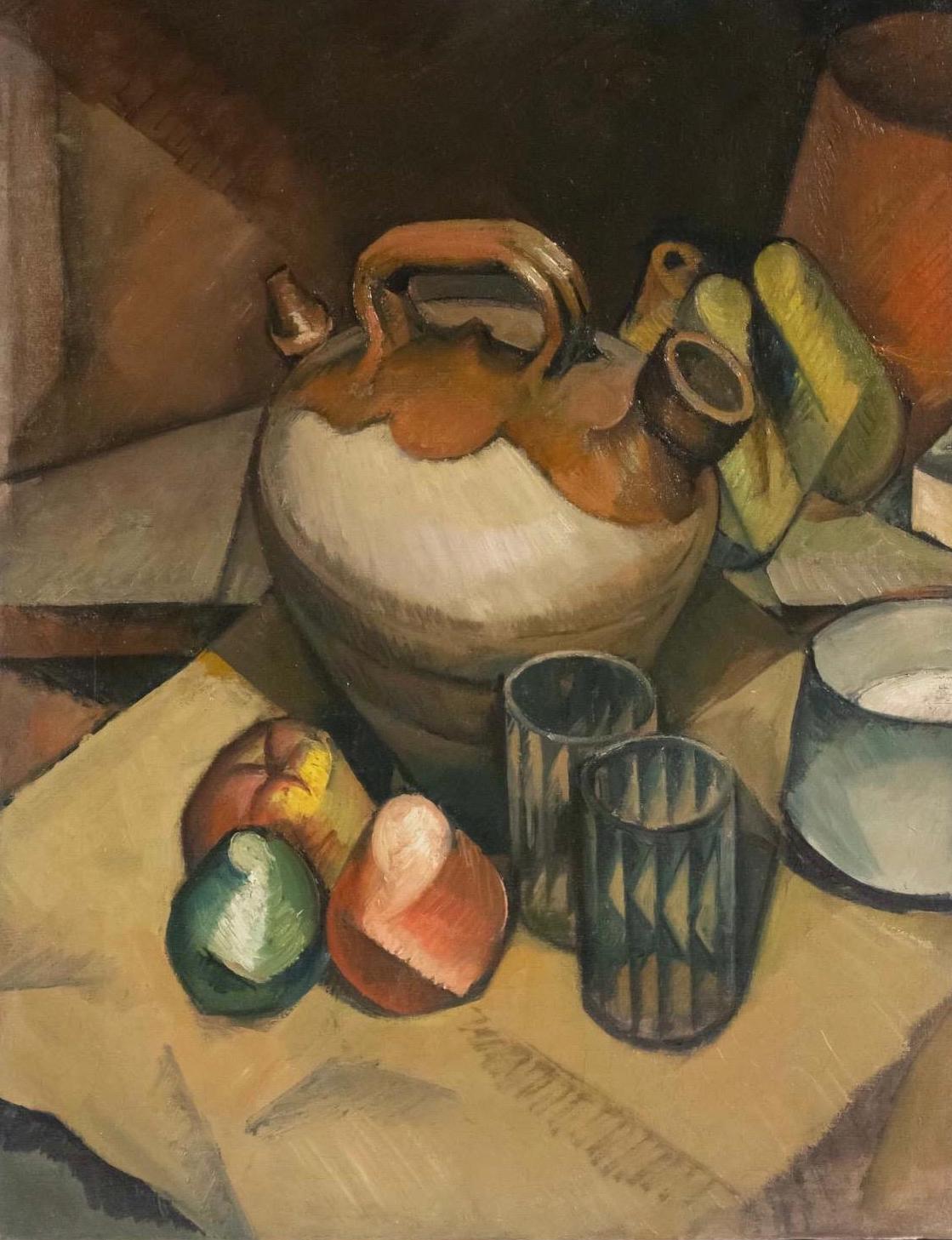 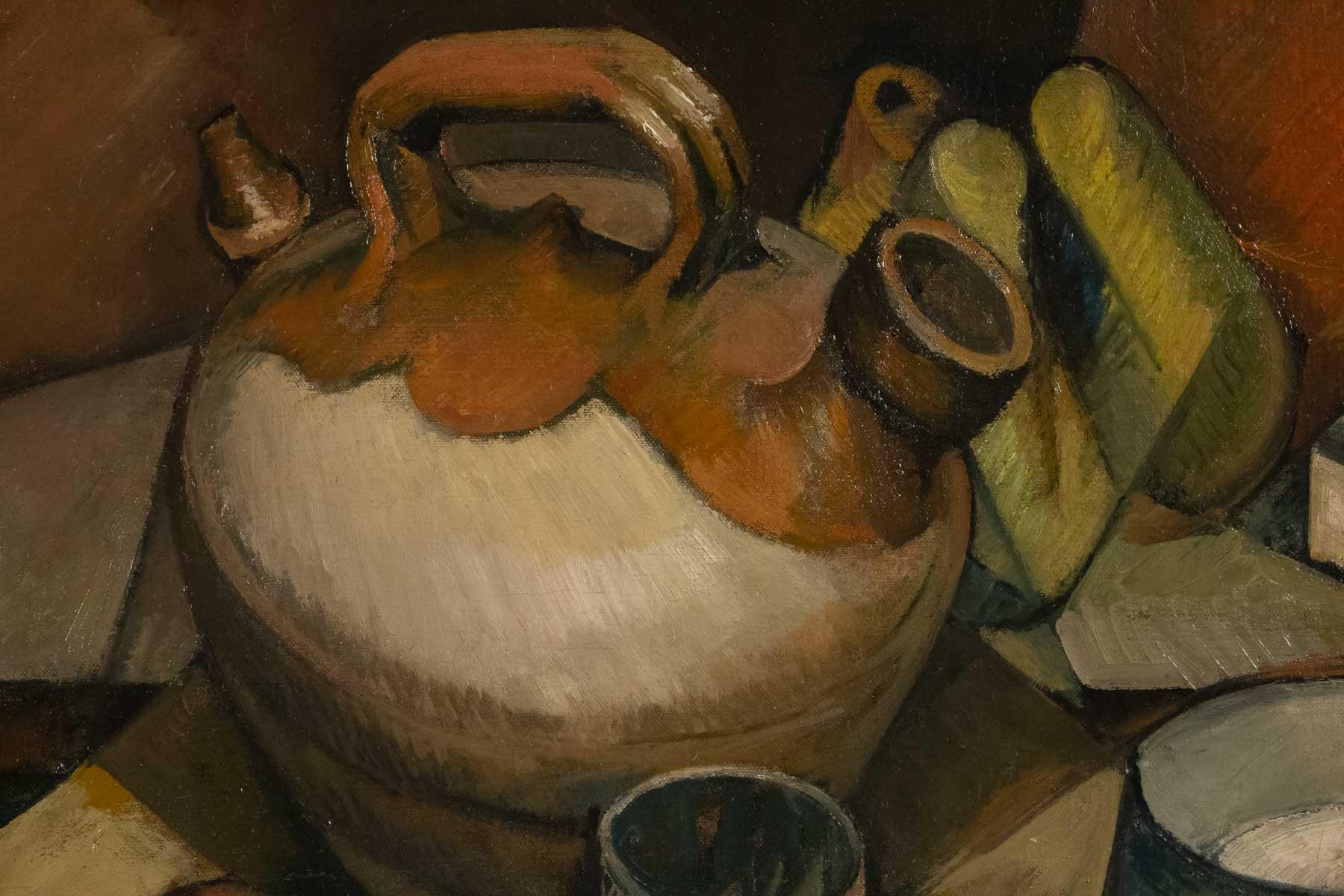 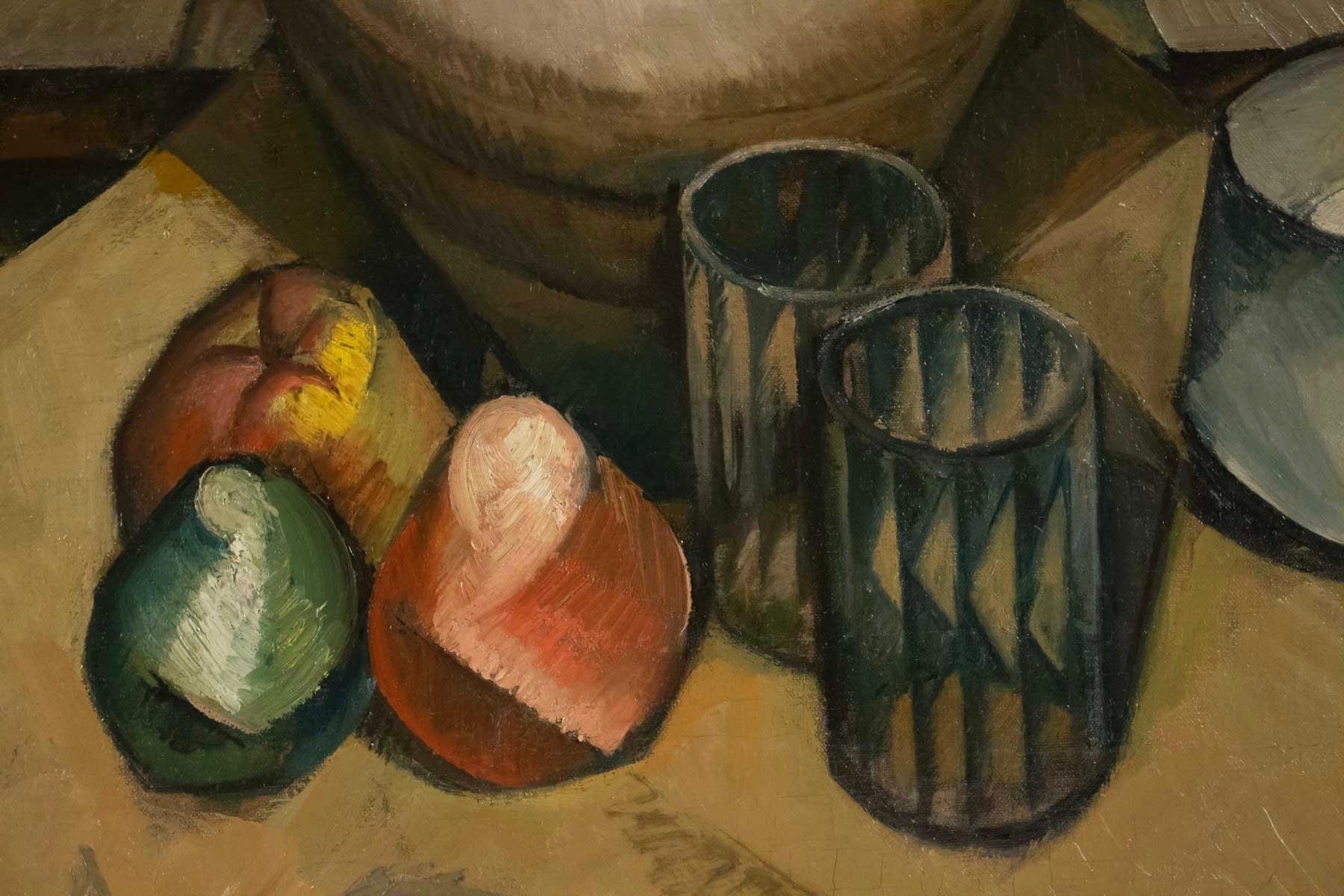 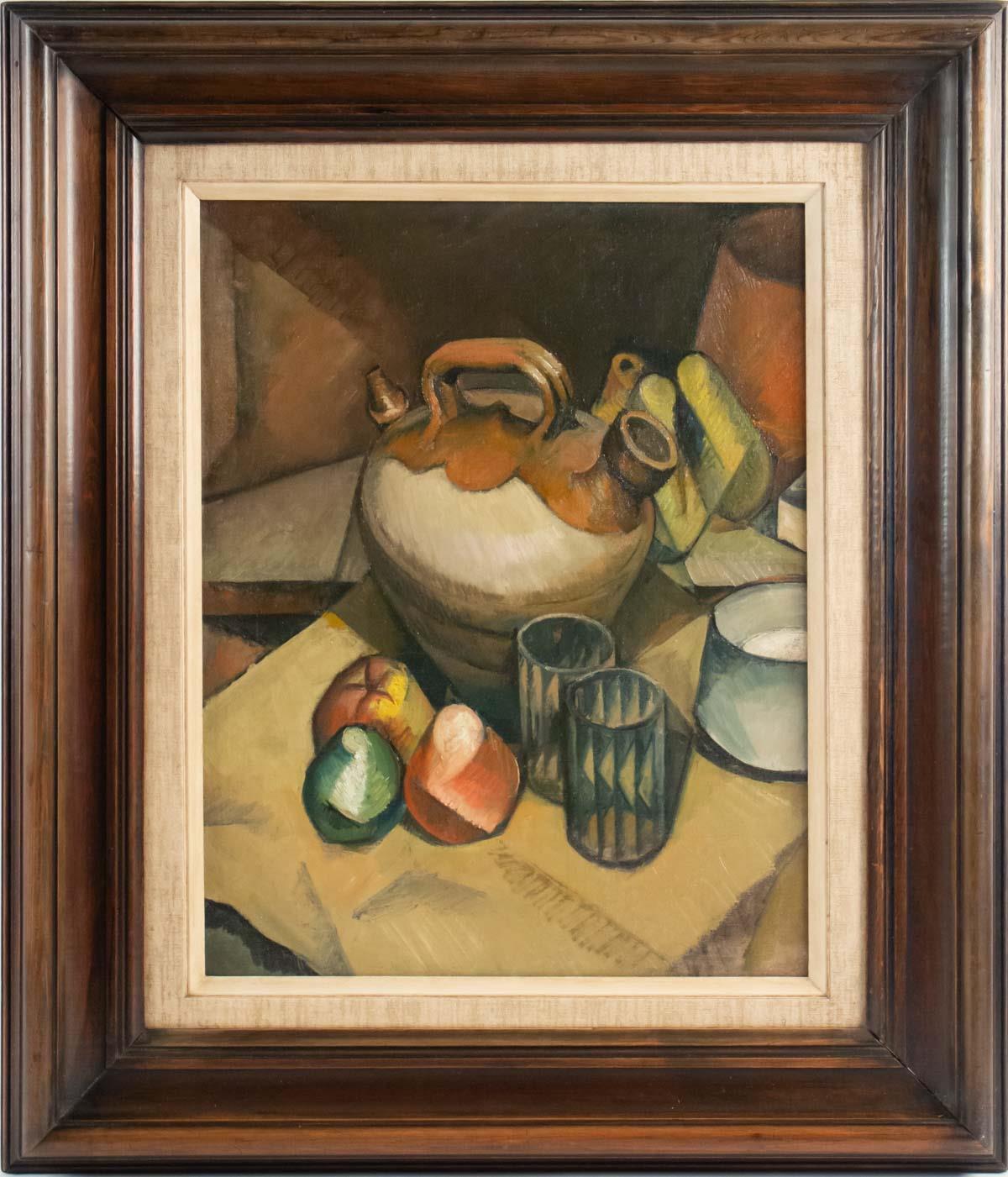 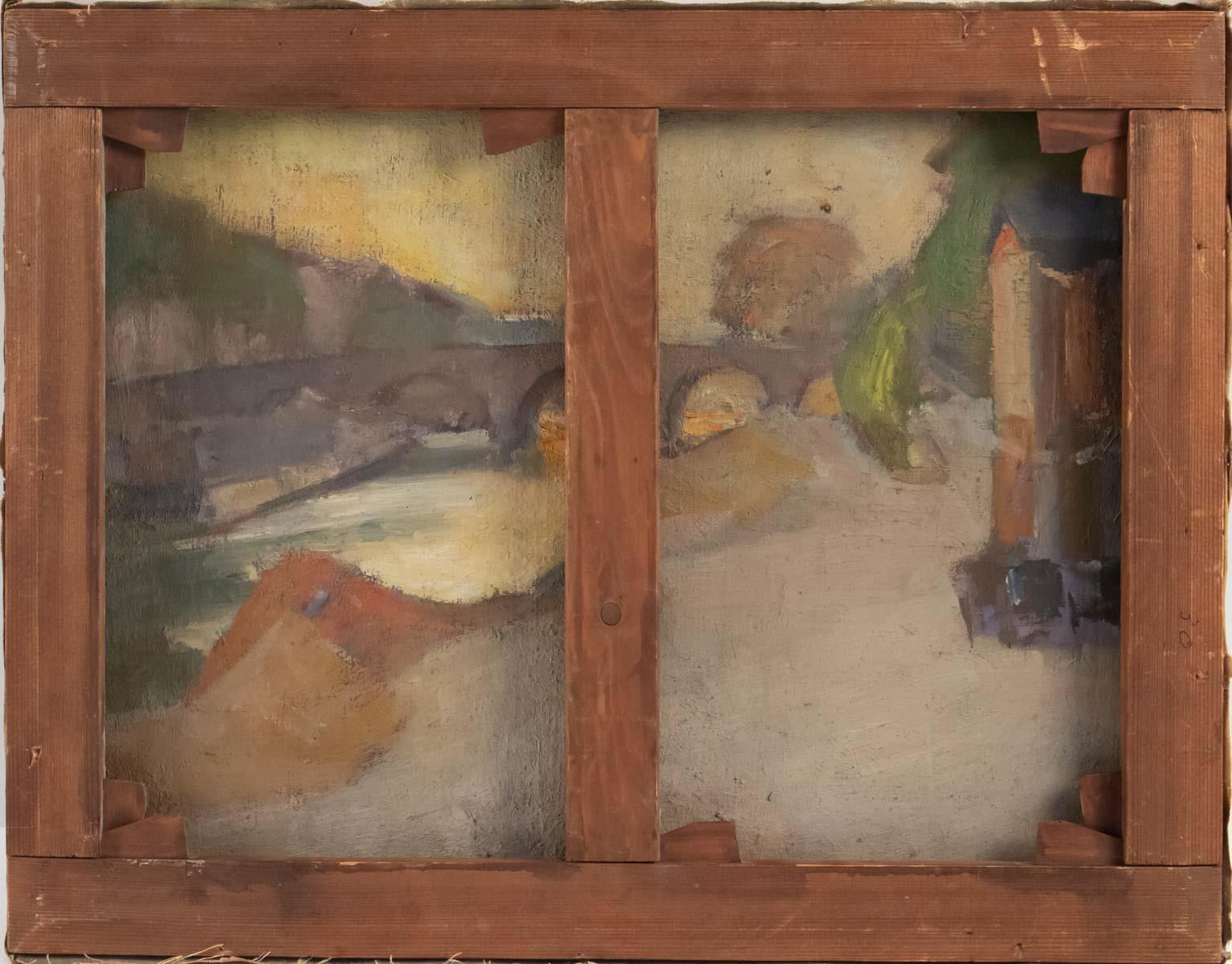 The artist delivers here a Cubist still life, solid and austere, which the English will recognize as the main qualities of the French tradition, from Poussin to Cézanne. The terracotta jug is a recurring motif, which he uses on the back of his most famous self-portrait.

The painting has a reverse side . The painter depicts a view of the banks of the Seine and the Pont Marie painted from the window of his studio on the Île Saint-Louis, around 1910. We would like to thank Mr Michel Charzat, author of the book “La Jeune Peinture Française 1910-1940” for his indications concerning the place and the date of the back of the work.

Jean Marchand is a painter of avant-garde adventure. It is from the Cubism of the Salons, prefigures Futurism. From 1910, the public and the critics wondered. Should Marchand be placed among the Fauves of yesterday or among the Cubists of tomorrow? Apollinaire, in The Cubist Painters of 1913, classifies the artist in “physical cubism”.

At the age of eighteen, Jean Marchand left his family to learn painting. He joined the studio of Jean Bonnat and Luc-Olivier Merson at the Beaux-Arts in Paris. Disappointed with academic learning, he decides to be his own master.

He exhibited at the Salon des Indépendants in 1908, won a scholarship from the Seine department in 1910, left his attic on the Ile Saint-Louis and took over Renoir’s former studio in Montmartre. He frequents the Lhotes and the Dufys in Orgeval. With Sonia Lewitska, decorative painter, he travels to Ukraine, Warsaw and Moscow.

In 1912, he exhibited at the Salon de la section d’or, a major exhibition in the history of the construction of Cubism. In 1915, he presented his paintings at the Carfax Gallery in London. Roger Fry, from the Bloomsbury group, exhibited it in London for his second exhibition on post-impressionist artists. He works with the group as an illustrator and painter.