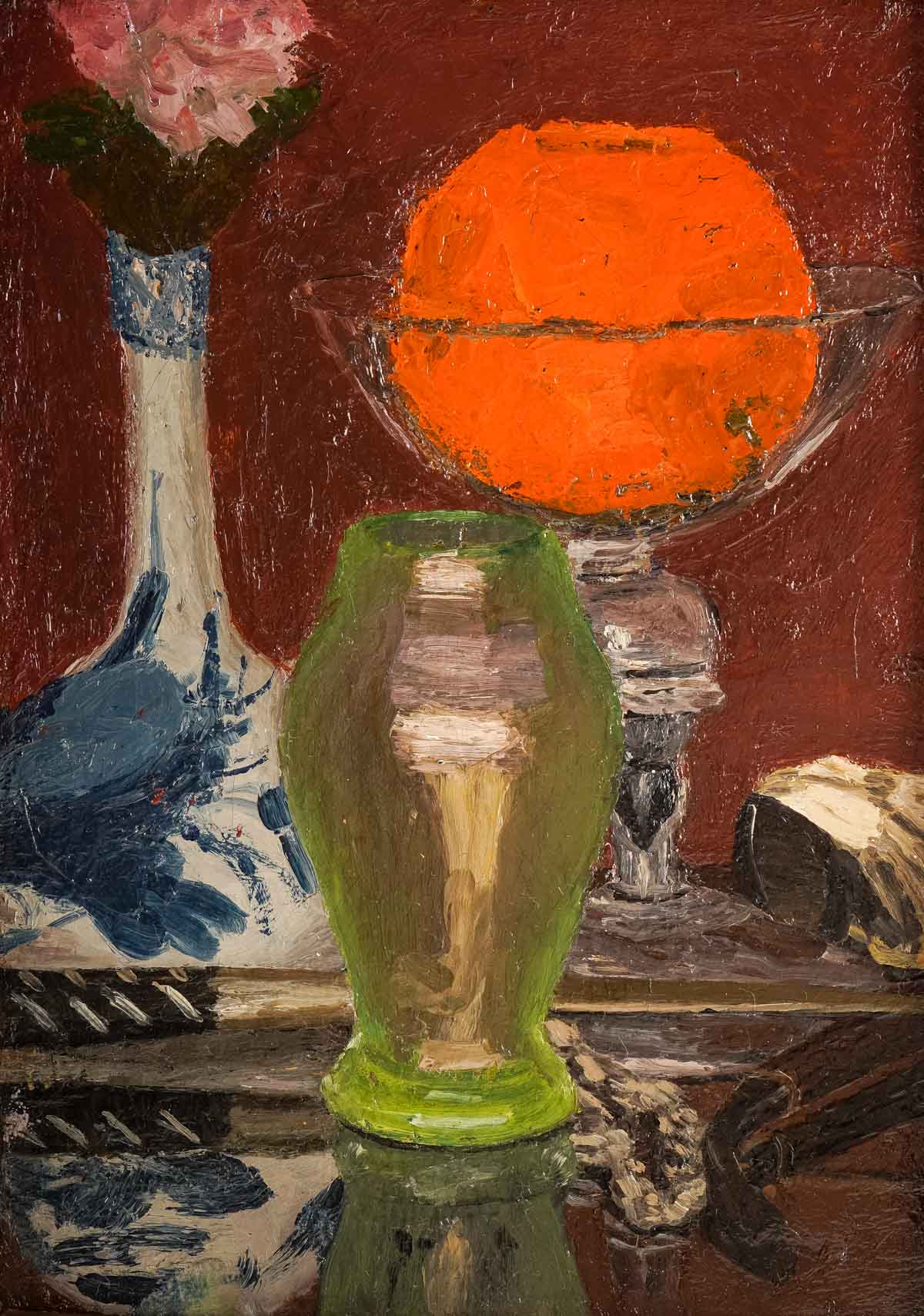 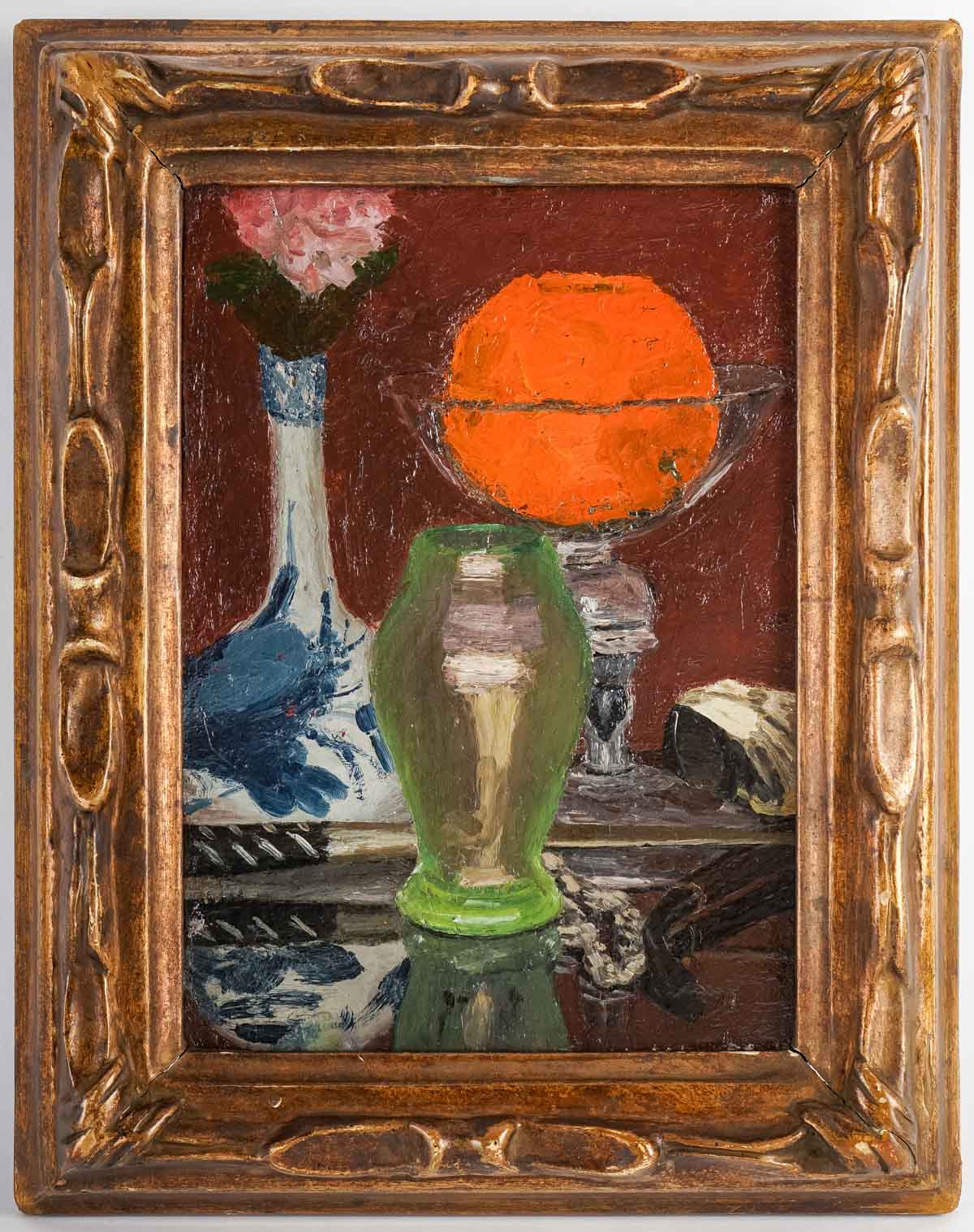 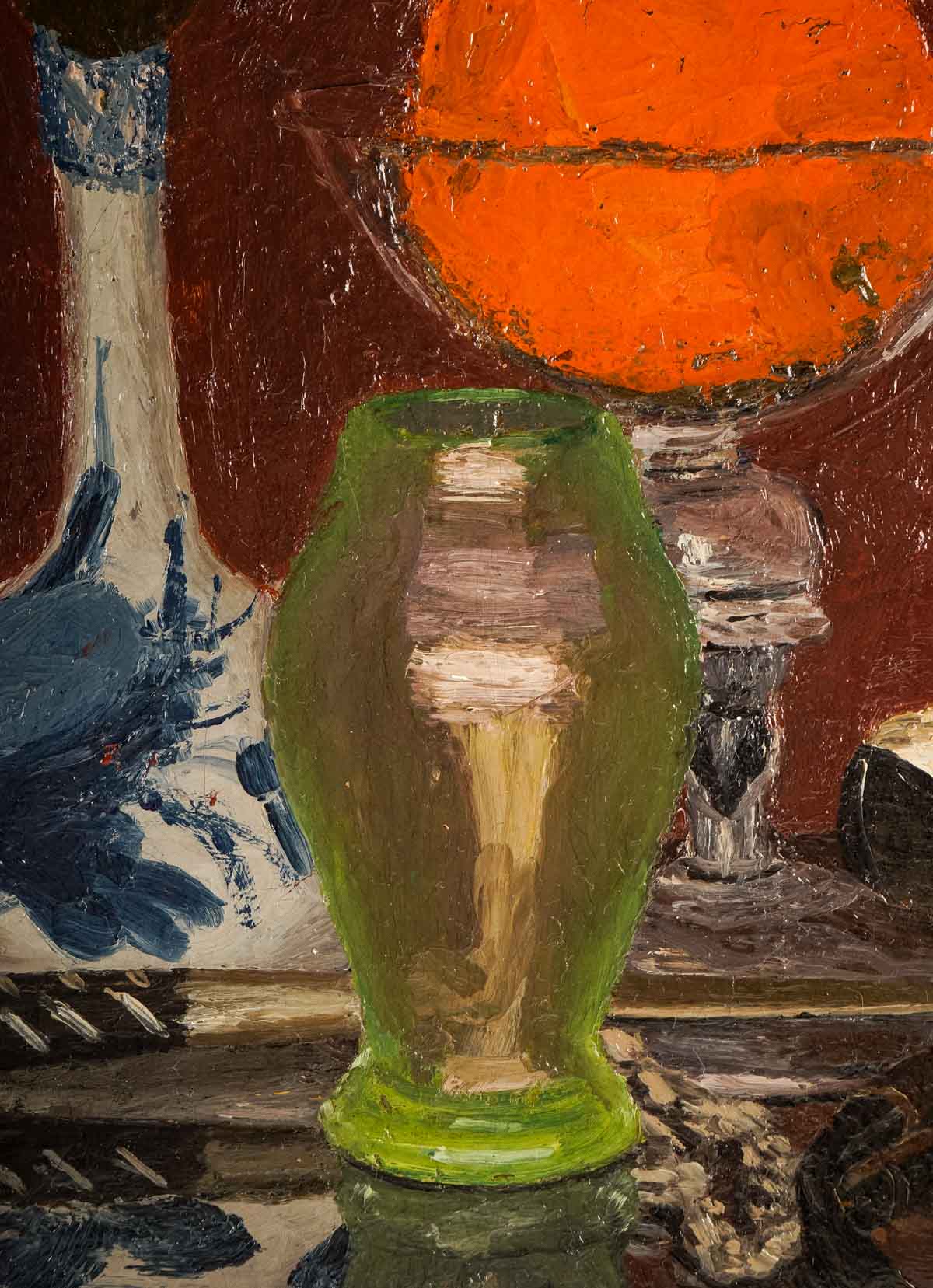 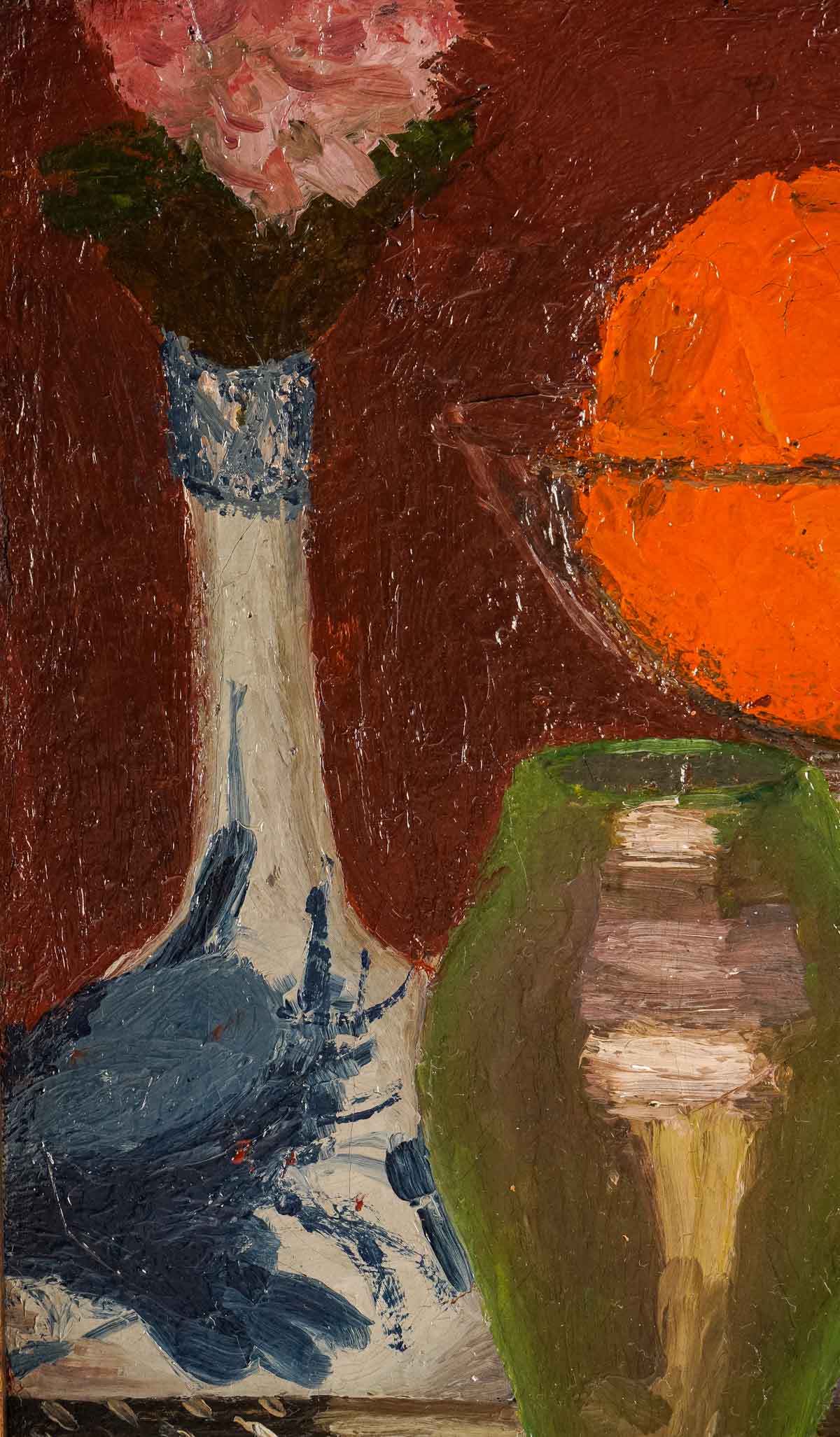 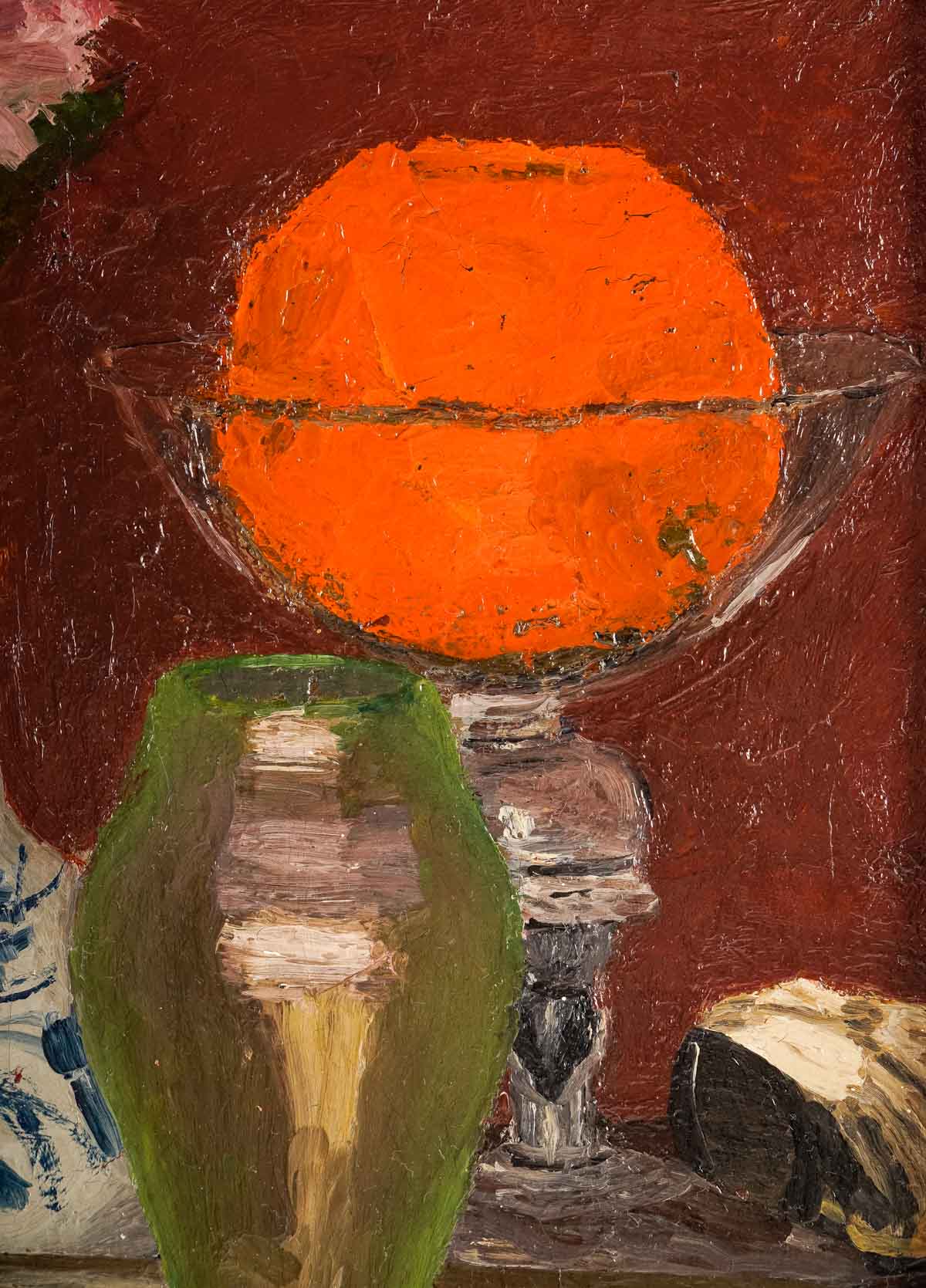 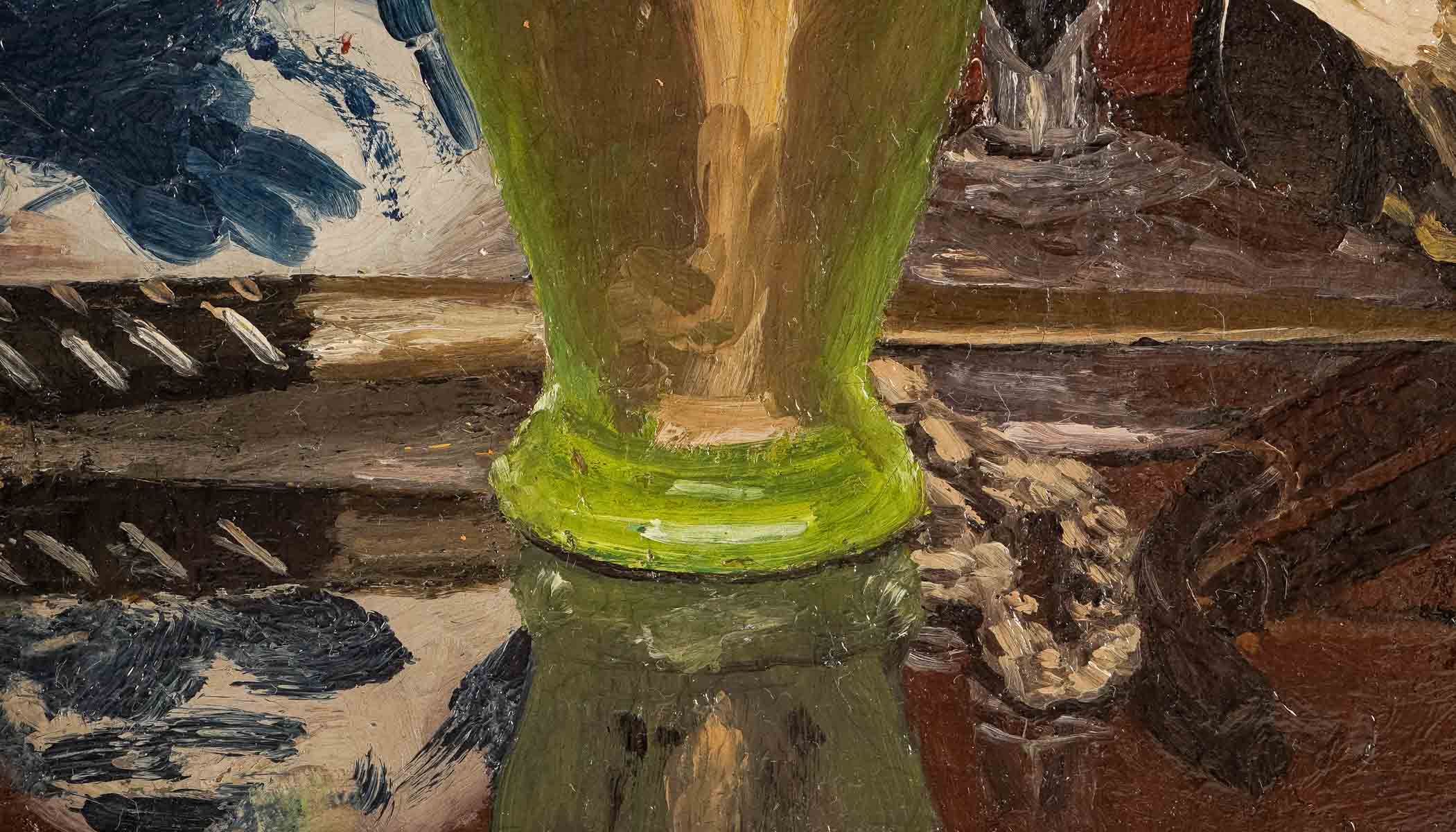 Jacqueline Marval delivers here a work of small format, simple and strong at the same time. This still life with warm colors and thick and unctuous material is an early work of the artist.
The artist plays with transparencies and reflections, breaks with perspective and gives density to the pictorial matter through color and touch. It is representative of the talent, the freedom and the will of Jacqueline Marval to launch out in the adventure of painting without influences, nor constraints.

Jacqueline Marval is a painter from the end of the 19th century and the turn of the 20th century. Born in 1866 to a family of schoolteachers near Grenoble, she came to painting only at a late age. She moved to Paris in 1895 in Montparnasse, at the heart of artistic life at the end of the century. A modest seamstress by trade, she was introduced to painting by her companion Jules Flandrin, a student of Gustave Moreau. He encourages her talent as an observer and colorist. She meets Matisse, Guérin, Laurencin, Camin, Rouault, Marquet and the others.
The artist opens the way to dreams and softness in his poetic compositions, like dreamlike projections of the mind.
Her paintings were refused at the Salon of 1900, she only exhibited there the following year. At that time, genius collectors and gallery owners Berthe Weill, Ambroise Vollard and Eugène Druet bought and exhibited his work. In February 1902, Jacqueline Marval exhibited alongside Matisse, Marquet, and his companion Flandrin at Berthe Weill, 25 rue Victor Massé. From then on, she took off and exhibited internationally, in Europe, the United States and Asia.
The spontaneous and generous art of the artist is praised and recognized by his peers. During a visit to the studio of the painter Lucien Mainssieux, Matisse was astonished by the power of the Odalisques, preserved in the Musée des Beaux-Arts in Grenoble. In a 1905 correspondence with the artist, Marquet and Manguin pay “the tribute of good taste to genius”.
The economic crises chained the galleries, reduced to exhibiting the few painters that the first war did not take away in addition to the new artists of the beginning of the century. The artist died in poverty and indifference, in the same room of the Bichat hospital as Paul Verlaine. His paintings were dispersed after the closure of the Druet Gallery in 1938.
Today, art historians and collectors are seeing a renewed interest in this free-spirited artist from the turn of the centuries. His poetic and colorful universe invites itself in the interiors of our contemporaries as well as in museums such as the Petit Palais in Paris and provincial museums such as the museum of Grenoble.