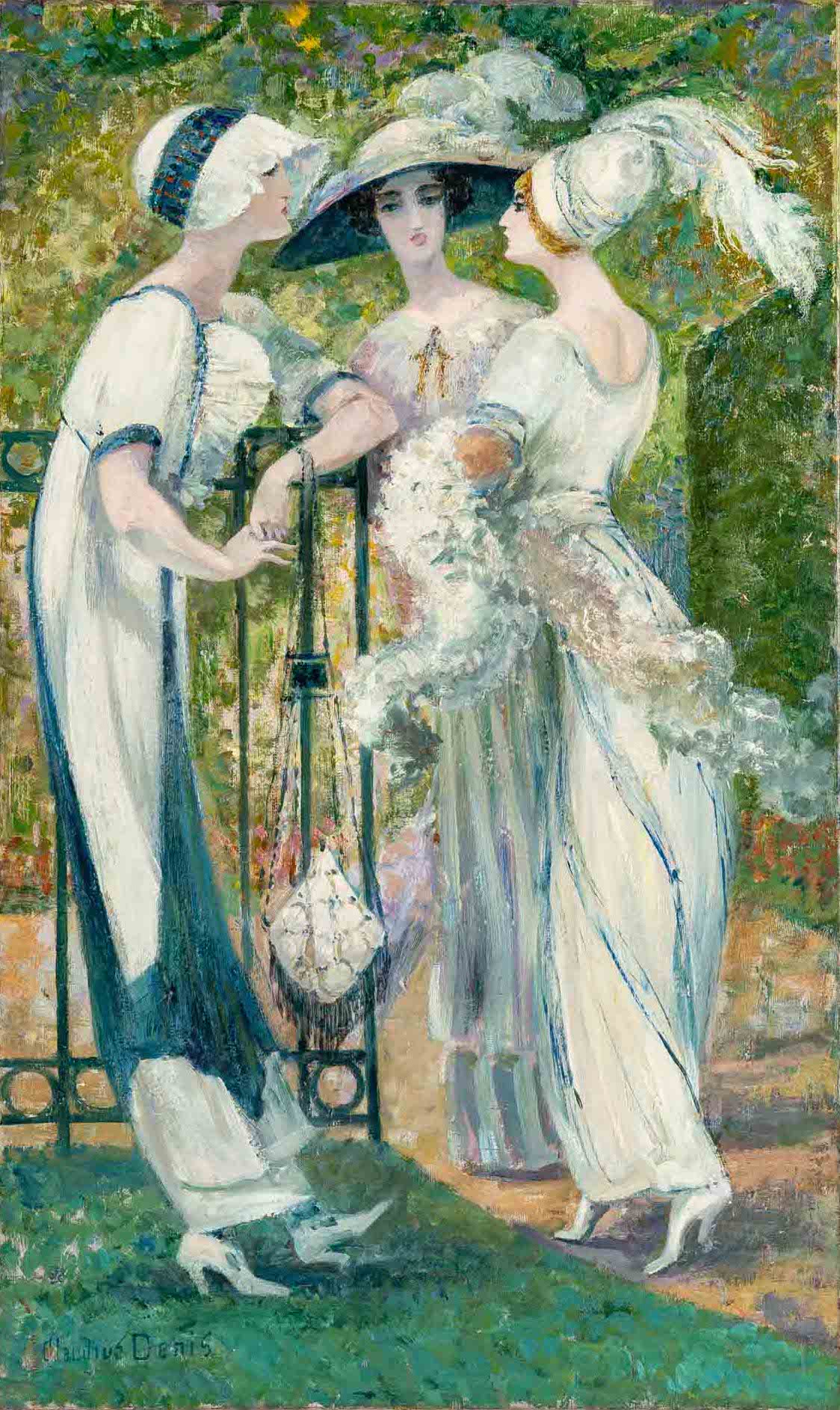 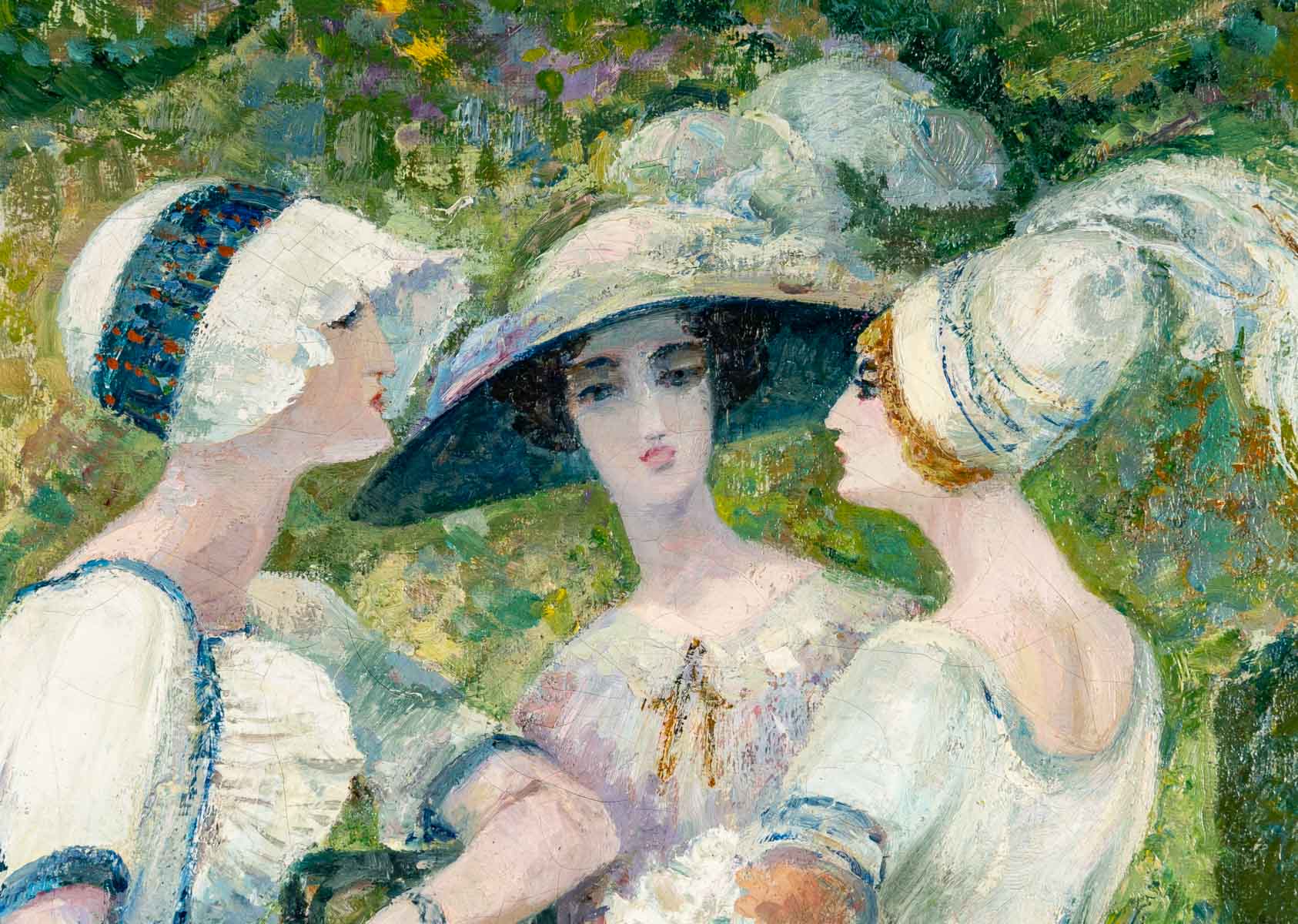 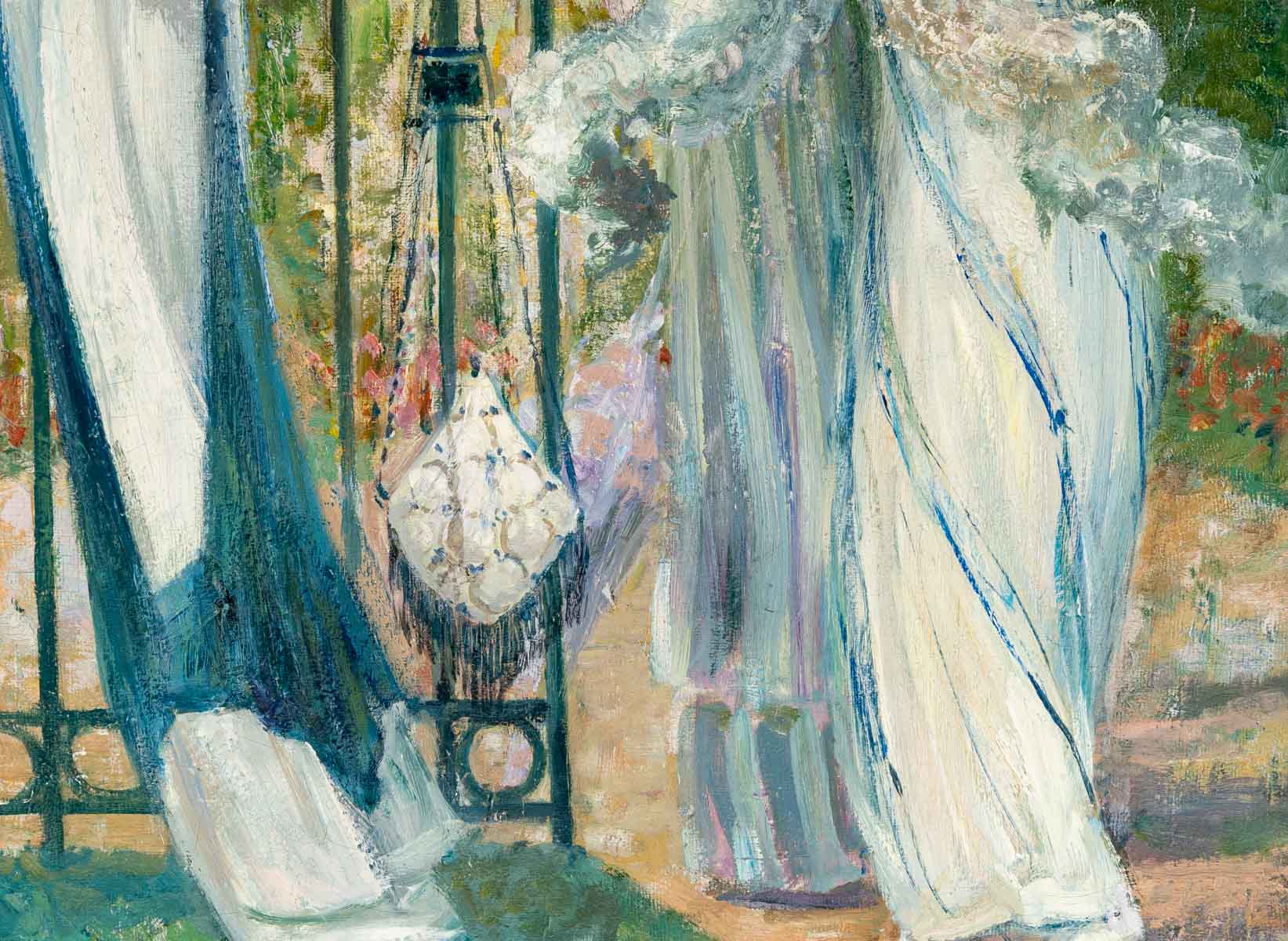 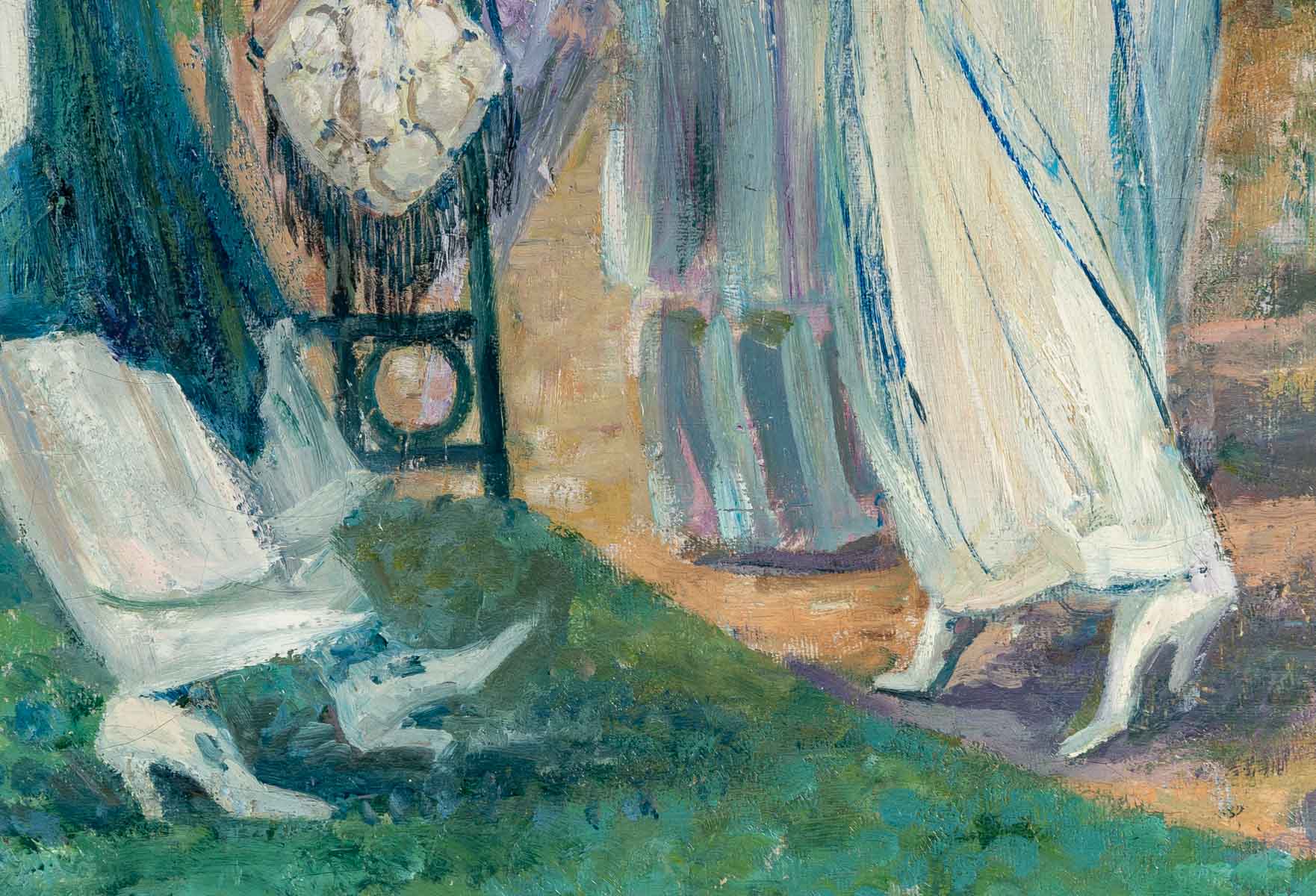 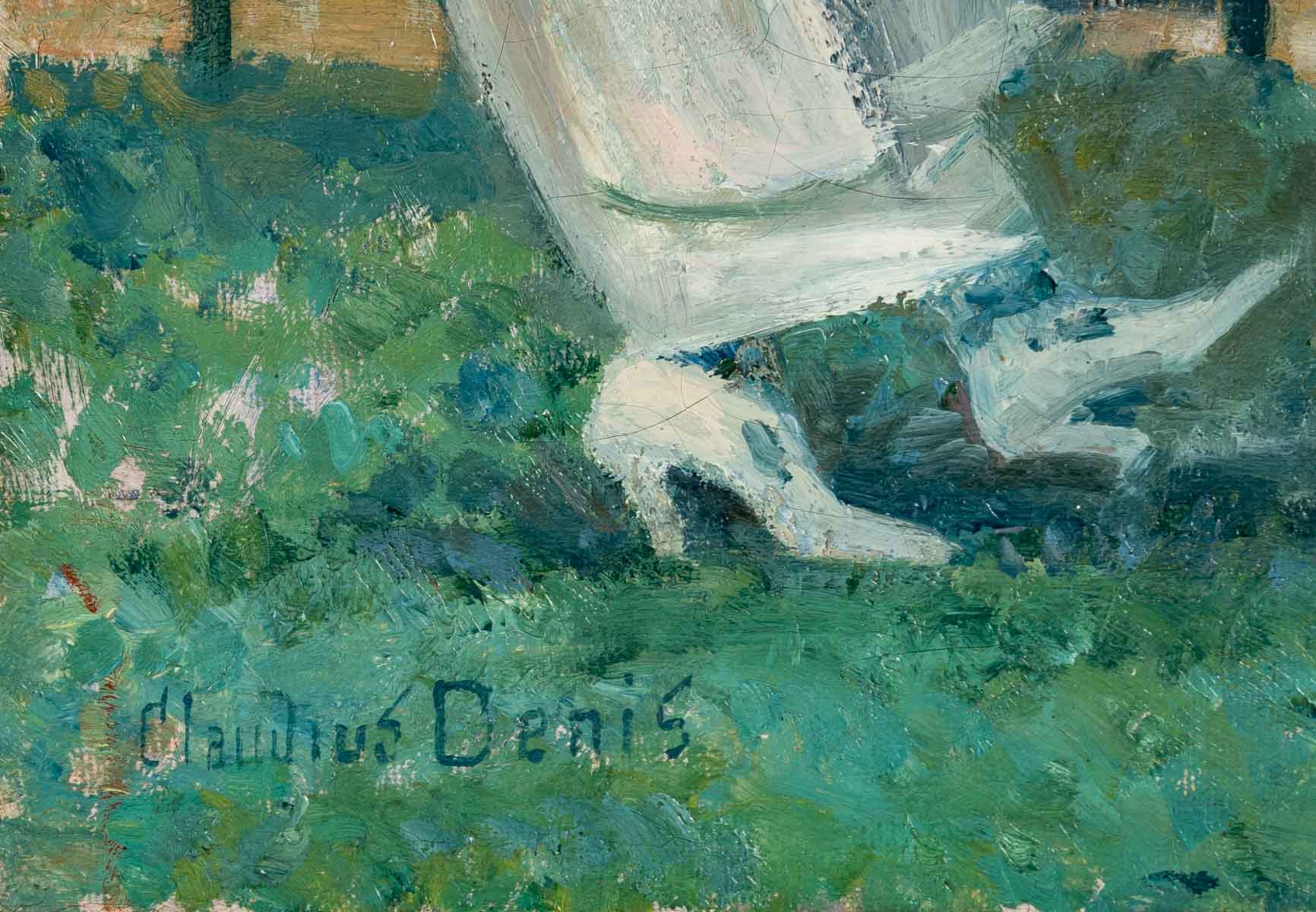 Claudius Denis gives us a charming scene of great freshness. Three elegant women with slender silhouettes and spring outfits are deep in discussion in front of the gate of a garden. The painter demonstrates importance to the details of their clothes and their accessories; a charming little worked bag, a boa, their three hats with different designs.
The detail of the outfits allows us to situate the scene between 1900 and 1914.
The scene evokes the mythological representation of the “three Graces” embodying respectively joy, charm and beauty; so often depicted in art.

Painter and engraver from Lyon, Claudius Denis spent his childhood in the workshop of his parents, silk weavers in Lyon.
Deciding to devote himself to painting, he must fend for himself. He first worked for a paint dealer and then began to take drawing lessons in a studio before entering the School of Fine Arts in Lyon.
After his military service in the Alps hunters, he left Lyon for Paris where he studied at the Ecole des Beaux-Arts and he has survival jobs.
There he meets his wife Elise with whom he has a son. They lead a bohemian life.
Mobilized and taken prisoner during the war, he drew a lot and brought back many drawings and sketches that he engraved.
At the end of 1917, they moved into a workshop in the 15th arrondissementof Paris. They lived there more comfortably thanks to the sale of drawings and etchings on the war.
After 1920 and the birth of his daughter, he passed a competition to be a drawing teacher in the schools of the City of Paris. He has a job at the School of Applied Arts , to teach “the flower” which is his specialty even if he has painted many other genres.
He has three afternoons of classes, which left him free time to paint. It was at this time that he starts making designs for wallpaper and fabrics for dresses. Around 1927, he finds a manufacturer of dress fabrics who regularly takes designs from him, securing him a steady monthly salary.

He exhibits his paintings twice a year at the Georges Petit gallery in Paris.

He loved his job and was very active, but earning money didn’t matter to him. Whenever he could, he escaped from Paris to the countryside, to his house in Hauterive, in Yonne or he cultivated flowers of all kinds there in an artistic disorder; he spent his time there, happy.