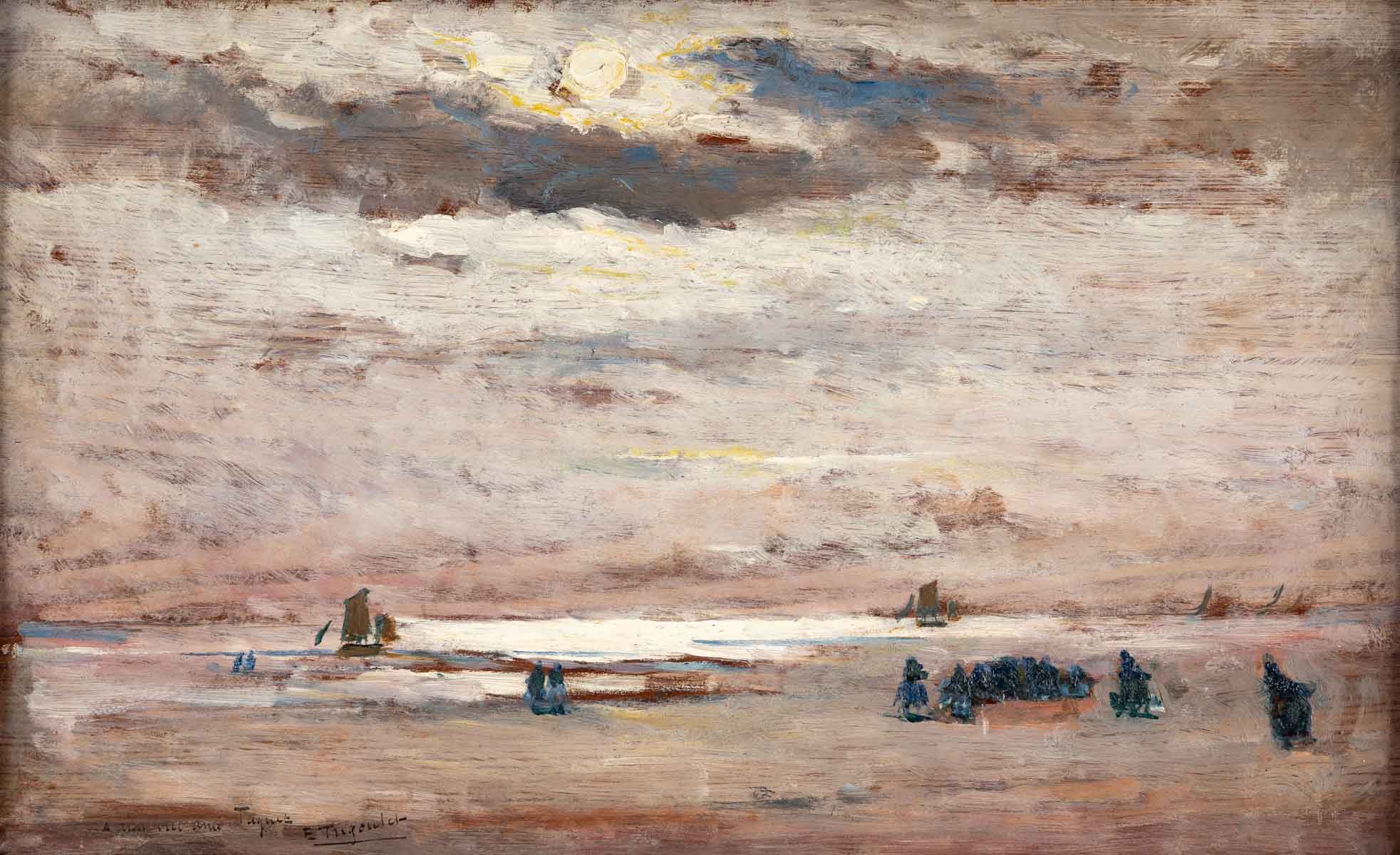 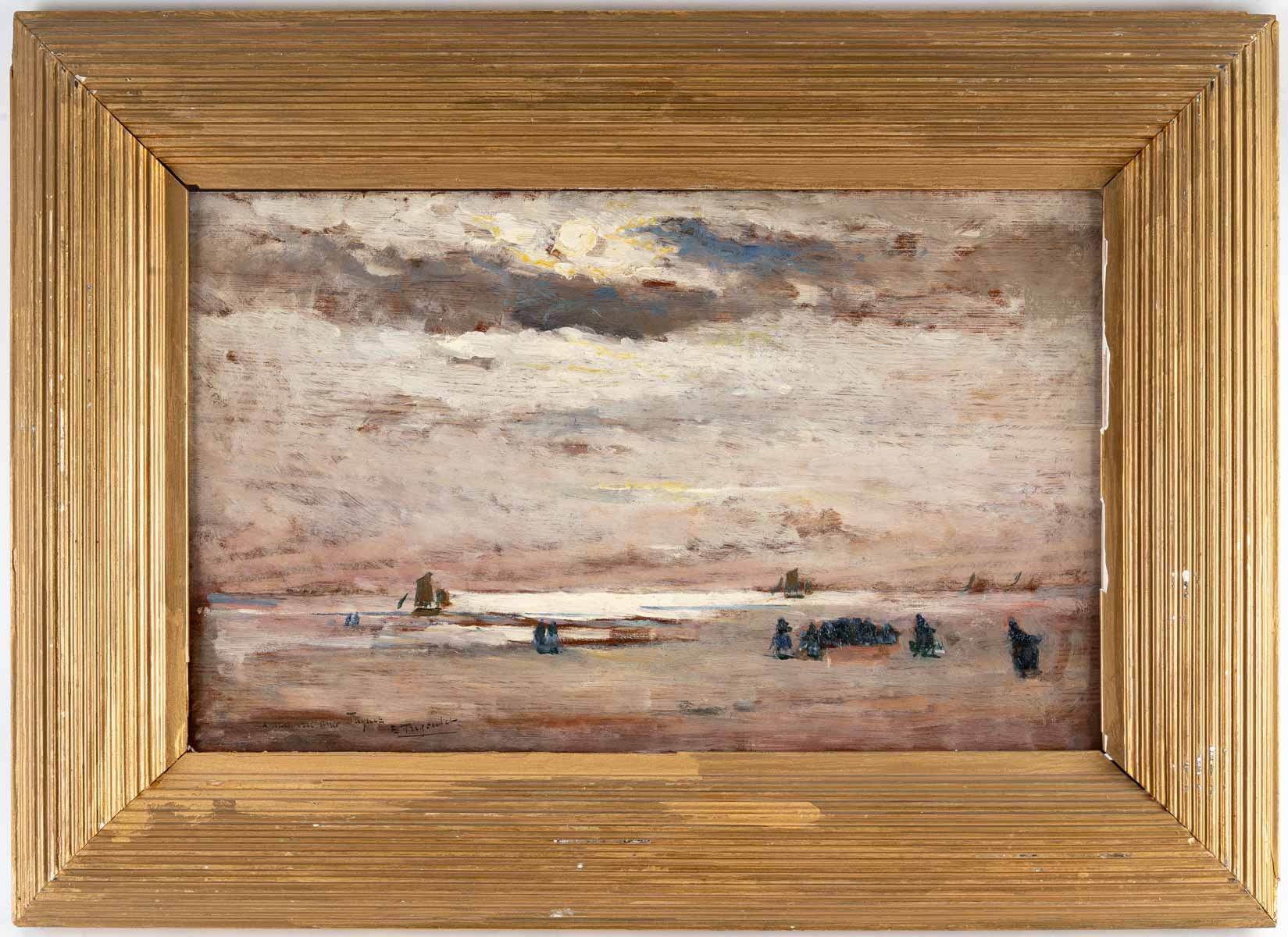 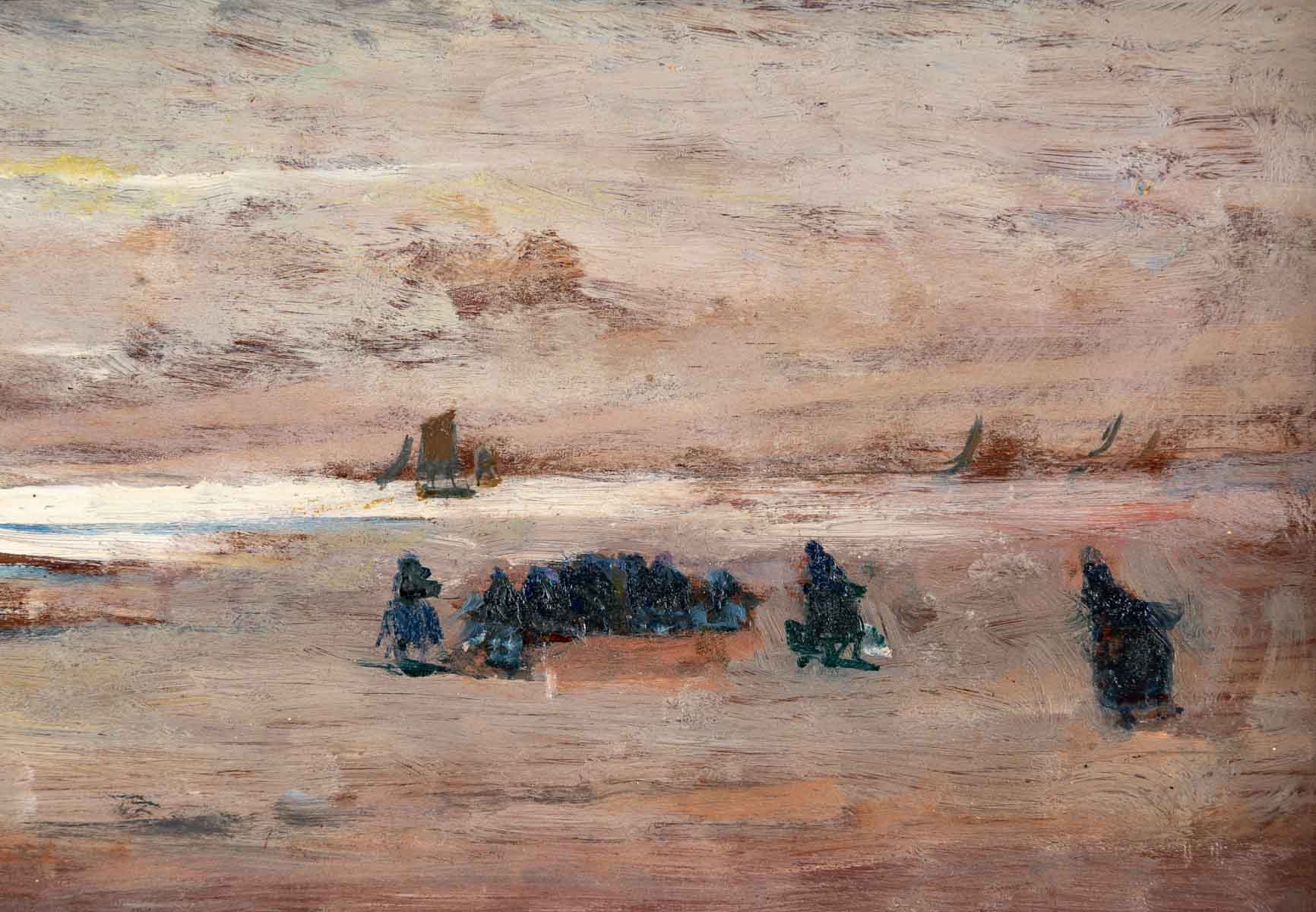 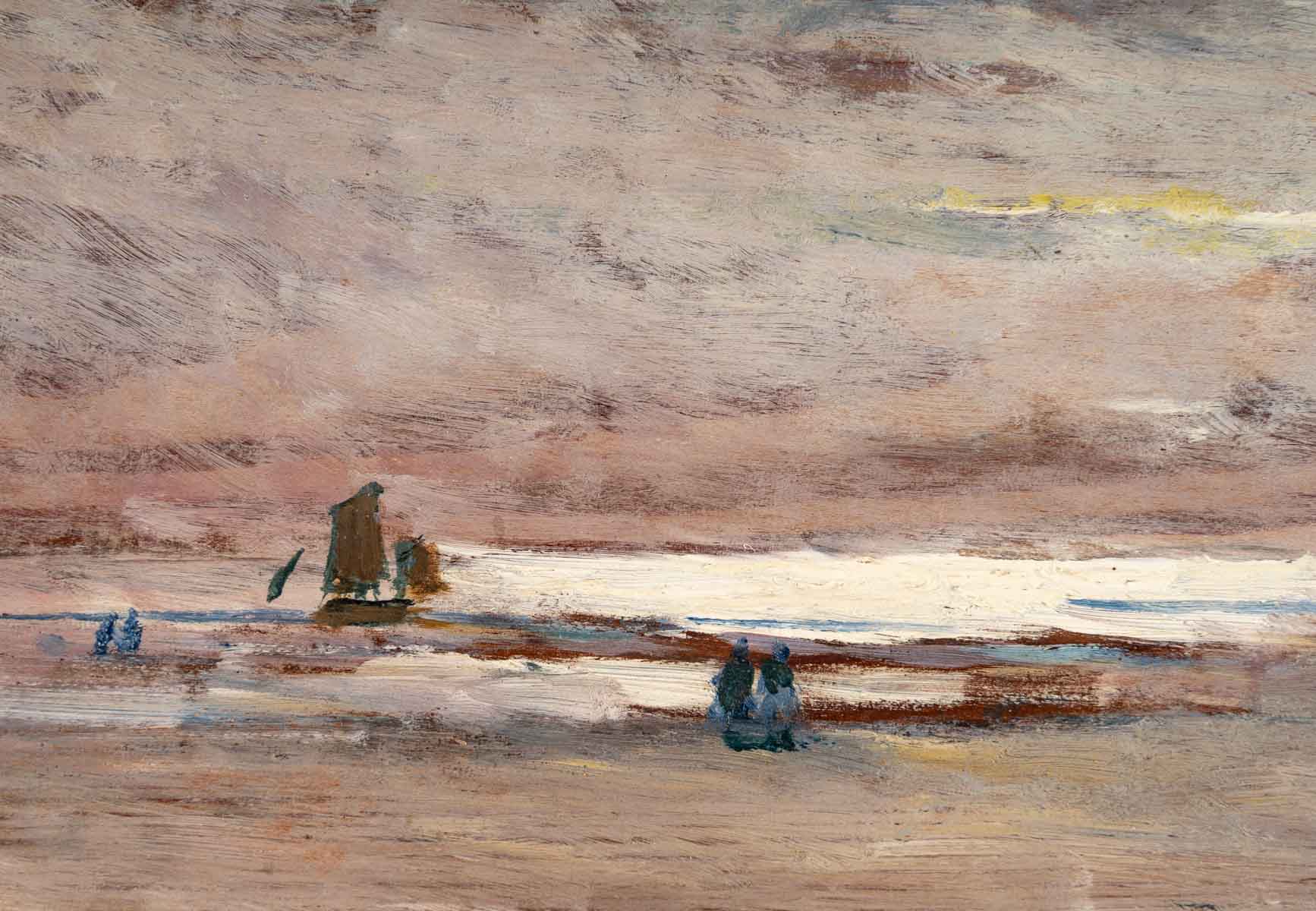 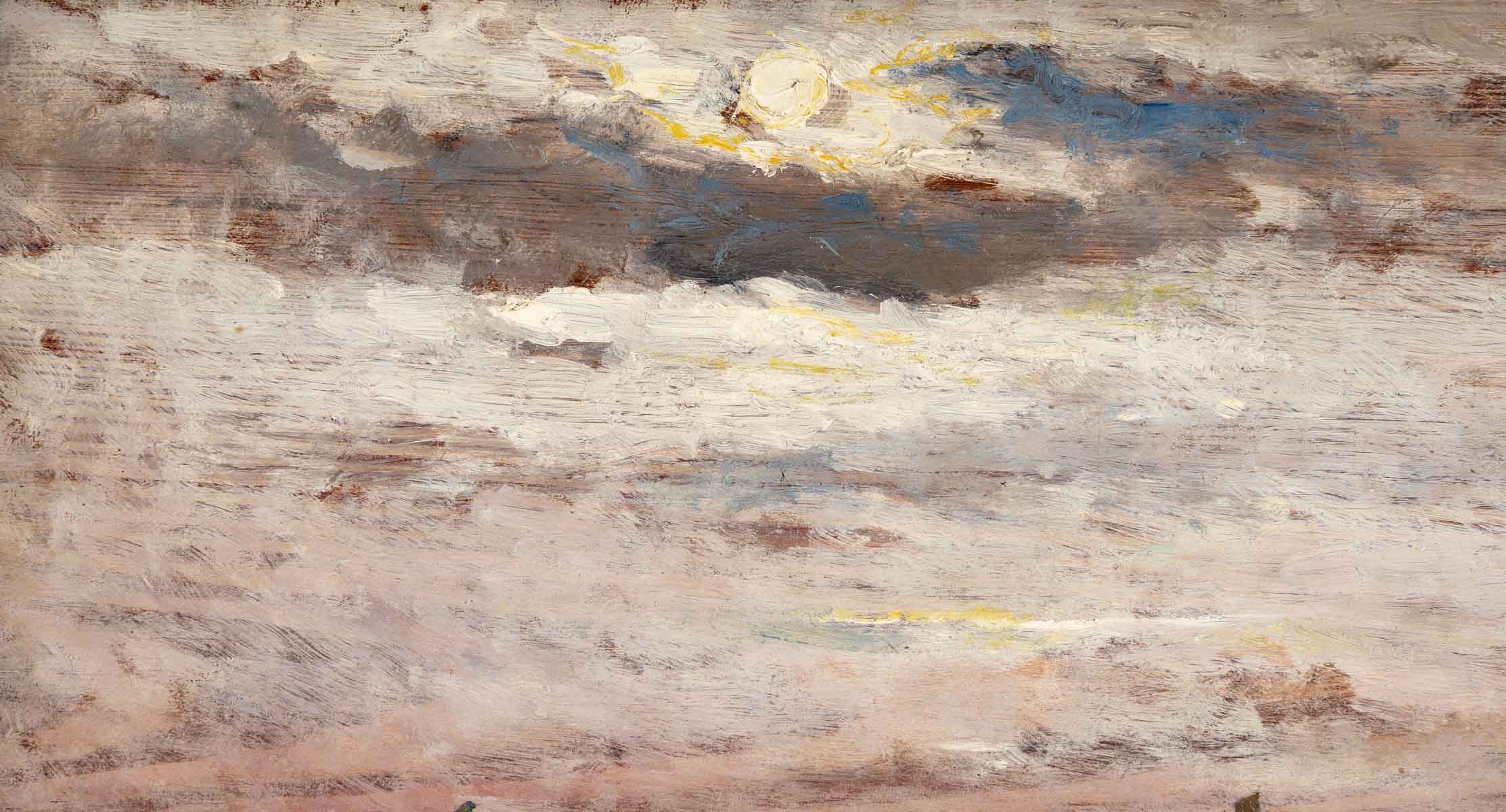 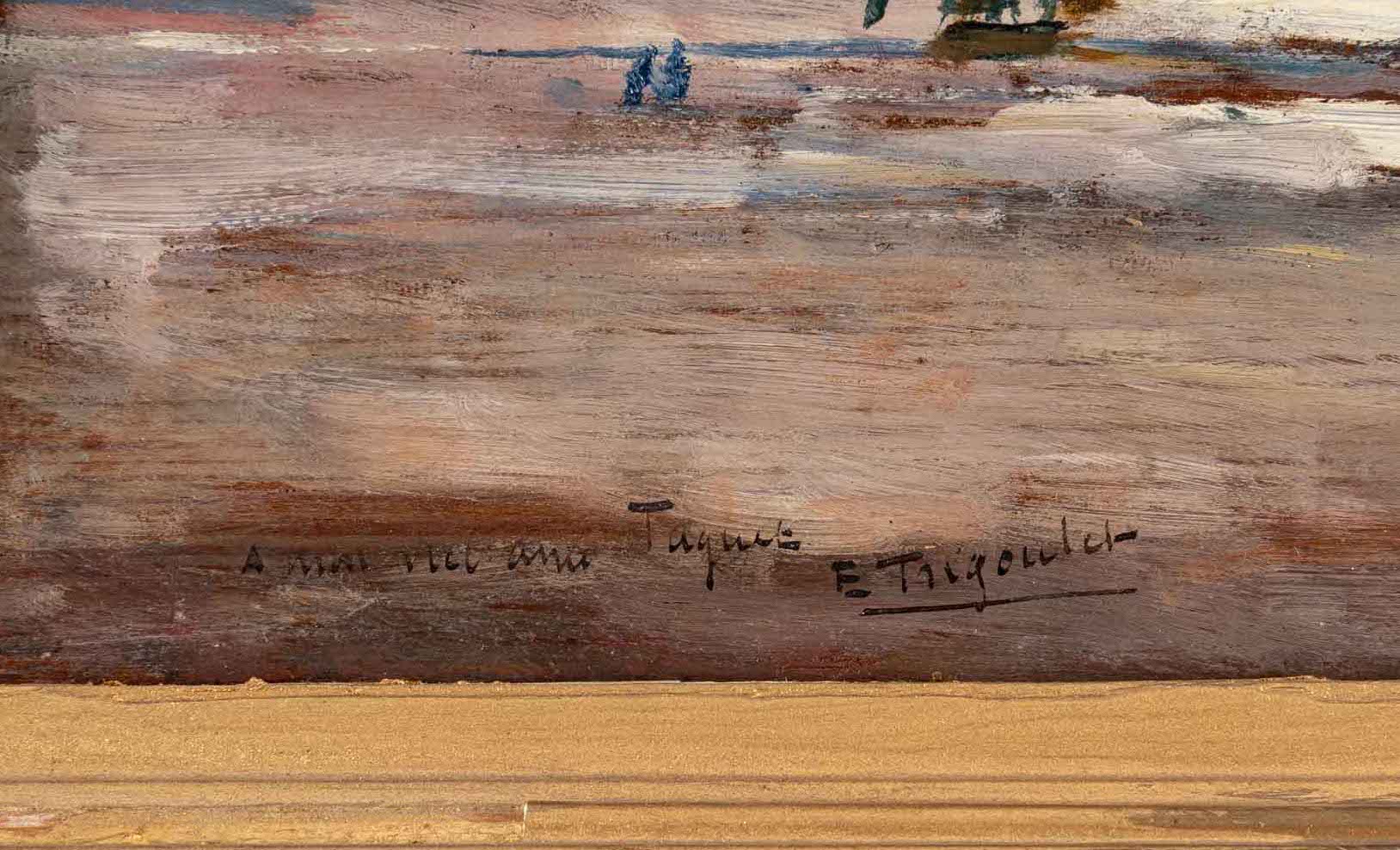 “An artist whose chromatic audacity, nervous graphics, and spontaneity make him an expressionist among the naturalists in Berck” (Museum of Berck-sur-Mer)

We find in this beachfront all the characteristics of the painter Eugene Trigoulet, the most discreet and the most daring of the school of Berck: a restricted chromatic, expressionism, suggestion and light.
The bright rays of the sun, certainly after the rain, pierce the clouds and come to illuminate the beach. Women in black, workers of the sea, advance grouped. Barely sketched fishing boat sails stand out on the sea. The suggested scene is brushed with lightness and spontaneity in a cameo of beige, gray. The painter leaves reserves that let the orange of the panel shine through.

A student of Jean-Léon Gérôme, Albert Maignan and Henry Lévy, Eugène Trigoulet regularly exhibited his works at the Salon des artistes français, where he was admitted in 1889, as well as at the Salon d’automne in the 1900s. He won the second Grand Prix de Rome in 1892, a period in which he presented paintings with very academic subjects. As a drawing teacher in the art workshops of the city of Paris since the end of the 1880s, he brought back views of Italy, Spain, Bruges and Algeria which made him admitted to the salon of French orientalist painters. The quality of his graphic expression earned him, in 1898, a place among the “Masters of the Print” and he even illustrated Les Naufragés de la Djumna by Emilio Salgari for Charles Delagrave in 1902.

In 1898, for health reasons, he went to Berck-sur-Mer, which had become an essential seaside resort, and fell in love with the Opal Coast. Almost all of the work of his last 12 years is related to Berck where he settled in rue du Phare.
Attracted by the indescribable changing light of the Opal Coast, he put his easel on the sand and lingered on the trades of the beach, particularly fascinated by the work of women.
The seascapes of the Opal Coast will inspire him until his death
Eugène Trigoulet died prematurely in Berck at the age of 46.