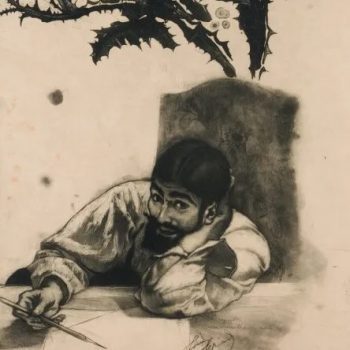 Louis Legrand was born in 1963 in Dijon. Painter, watercolourist, engraver and illustrator, he is a multifaceted artist.

After training at the School of Fine Arts in Dijon, he went to Paris in 1884 and became the student of the brilliant and sulphurous Félicien Rops who introduced him to various techniques including engraving. The teacher appreciates the aptitudes of his pupil. In a letter dated 1888 from Félicien Rops to Mr Roques, director of the weekly “ Le Courrier Français ” he evokes “the precious and rare qualities, dominated by an extraordinary love of Louis Legrand’s modeling”. he also writes “You can imagine that it never occurred to me to teach this fellow! Legrand began without help, like ducklings going to the pond, to make beautiful drawings which attracted the attention of artists and amateurs.

From 1902, the artist participated in the Salons des Beaux Arts in Paris, at the Universal Exhibition of 1900 where he won a medal.
He also exhibited at the Samuel Bing gallery and then in 1904 at the Georges Petit gallery. He was decorated with the Legion of Honor in 1906.
In 1911, the Durand-Ruel gallery presented a major retrospective of his work.

Before Toulouse-Lautrec, he depicted the Parisian nightlife of the Belle Epoque, the lively cafés, the women, the cancan dancers.
The Moulin Rouge ball in Paris has long been the artist’s studio.

It is present in many private collections.

. In France: Dijon, the Magnin National Museum and the Museum of Fine Arts;