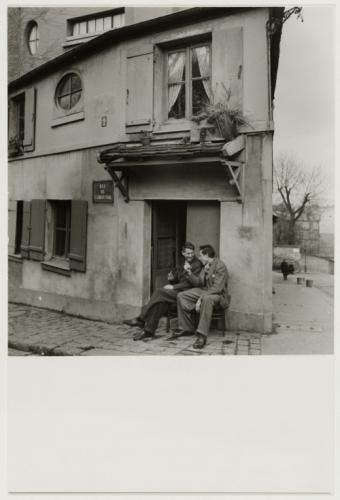 Eugène Paul was born rue Lepic, in the heart of Montmartre. Her mother was an embroiderer and her father a café musician. He began to paint at an early age. His apprenticeship is original: as an apprentice interior decorator, he looks around him in the rich apartments.

Passionate about painting and eager for knowledge, he observes the works collected by art lovers, wherever his work has taken him. In addition, he learns about human anatomy by getting to know surgeons and accompanying them to operating rooms. He completed his training during the few years he attended the Ecole des Beaux-Arts in Paris.

In 1913, he volunteered for the front and was wounded. A year later, a second injury led to the amputation of his right leg. Back in Paris in 1916, he began to paint. His first oil painting – the Moulin de la Galette seen from his window – dates from 1916. From then on, Eugène Paul began his career as a painter. It represents many views of Paris to satisfy demand.

He signed for the first time a painting “GEN-PAUL” in 1918. In 1920, he exhibited at the Salon d’Automne, and remained faithful to this institution, as well as to the Salon des Indépendants. He travels to Spain and confronts the masterpieces of the masters: Goya, El Greco, Velasquez… On his return, he uses black even more in his compositions.

His first personal exhibition took place at the Bing Gallery in 1926. He illustrated several books by Céline, including Voyage au bout de la nuit and Mort au credit in 1942. He made engravings, some of which were published in a collection entitled Vues de Montmartre .

At the end of World War II, he traveled frequently to the United States and New York. At the time, he held the title of general. In 1952, the Drouant-David gallery in Paris devoted a retrospective to him. Besides the annual events of the Parisian art scene (the Salons), Gen Paul exhibits only exceptionally. Indeed, the artist refuses to work with galleries, he does not depend on any of them. At the end of his life, he travels frequently to France and Spain.

Gen Paul is collected in France

• Portrait of the painter Eugène Paul known as Gen Paul at his home in 1969, Paris. © Getty Images